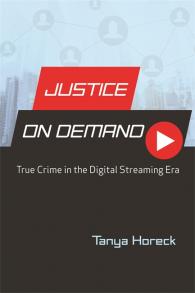 Justice on Demand: True Crime in the Digital Streaming Era offers a theoretical rumination on the question asked in countless blogs and opinion pieces of the last decade: Why are we so obsessed with true crime? Author Tanya Horeck takes this question further: Why is true crime thought to be such a good vehicle for the new modes of viewer/listener engagement favored by online streaming and consumption in the twenty-first century?

Examining a range of audiovisual true crime texts, from podcasts such as Serial and My Favorite Murder to long-form crime documentaries such as The Jinx and Making a Murderer, Horeck considers the extent to which the true crime genre has come to epitomize participatory media culture where the listener/viewer acts as a "desktop detective" or "internet sleuth." While Facebook and Twitter have re-invigorated the notion of the armchair detective, Horeck questions the rhetoric of interactivity surrounding true crime formats and points to the precarity of justice in the social media era. In a cultural moment in which user-generated videos of real-life violence surface with an alarming frequency, Justice on Demand addresses what is at stake in the cultural investment in true crime as packaged mainstream entertainment. Paying close attention to the gendered and racialized dimensions of true crime media, Horeck examines objects that are not commonly considered "true crime," including the subgenre of closed-circuit television (CCTV) elevator assault videos and the popularity of trailers for true crime documentaries on YouTube. By analyzing a range of intriguing case studies, Horeck explores how the audience is affectively imagined, addressed, and commodified by contemporary true crime in an "on demand" mediascape.

As a fresh investigation of how contemporary variations of true crime raise significant ethical questions regarding what it means to watch, listen, and "witness" in a digital era of accessibility, immediacy, and instantaneity, Justice on Demand will be of interest to film, media, and digital studies scholars.

Tanya Horeck is a reader in Film, Media, and Culture at Anglia Ruskin University in Cambridge, England. She is author of the book Public Rape: Representing Violation in Fiction and Film and has published widely on violence and media spectatorship.

This is a beautifully written book, brilliantly argued and researched, on a key phenomenon of twenty-first-century media culture—the rise of the true crime genre across media and media platforms, from podcasting to long-form TV serials. Justice on Demand offers an original take on the genre by arguing that its impact on issues of justice with respect to race and gender cannot be understood without investigating how its narratives are networked through digital and social media, creating disquieting affective and participatory dispositions. This is compelling work that should find itself at the center of debates about true crime in the context of film, television, and digital media studies; critical race studies; and feminist studies.

With Justice on Demand, Tanya Horeck offers a riveting, timely account of audiences’ affective investment in true crime narratives in relationship to both streaming media cultures and ‘post-truth’ times. Through careful close readings and theoretically astute analysis, she shows how the form of such storytelling solicits fantasies of interactivity while delivering emotional rewards closely attuned to the rhythms of on-demand spectatorship.

In Justice on Demand, Tanya Horeck offers a deft analysis of the role true crime narratives have come to play in the digital, multiplatform era. She skillfully examines how audiences watch, listen to, interact with, and make meaning out of true crime media ranging from long-form documentary to memes to trailers and more. Compelling and insightful, Horeck’s book is essential reading for anyone interested in the affective and visceral appeal of true crime in the contemporary moment.

Tanya Horeck’s Justice on Demand offers a cogent and critical exploration of how the true crime genre has captured widespread attention in our contemporary networked, transmedial environment. Justice on Demand traces true crime’s prominence across multiple digital platforms, from feature films like Dear Zachary to long-form television documentaries, such as Making a Murderer, and from nuanced podcasts like Serial to sensational viral ‘elevator assault’ videos. Horeck reveals how the genre’s purportedly rigorous presentation of visible evidence consistently participates in and produces troubling viewpoints on race and gender.

– Jason Middleton, associate professor of English and director of film and media studies, University of Rochester

Finished Tanya Horeck's book Justice on Demand, which offers an excellent analysis of the trend of "true crime" media. Her book argues that the most effective way to analyze this type of media is affect theory. In using affect theory, Horeck is able to show how Netflix in particular uses a narrative model that mirrors a digital model to hook viewers. The book is a must-read for media scholars.

17 hours 3 min ago
Hey #movementdetroit fans! WSUPress's TECHNO REBELS is a great way to relive the excitement of @MovementDetroit all… https://t.co/f4nPn8uYj0
1 day 17 hours ago
Check out Cindy Hunter Morgan's new book at https://t.co/o1mzeoKv1M https://t.co/6W9FLg0RLa
2 days 20 hours ago
Wayne State University President M. Roy Wilson with his teacher in high school. Check out this image and many more… https://t.co/W3kp1D7dFX