Home » Books » Just for a Thrill 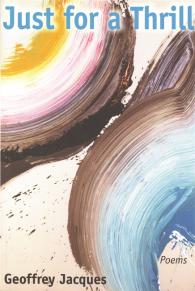 Just for a Thrill

"Geoffrey Jacques is a subtle, sophisticated poet who has read widely and has taken his cue from some of the most important vanguard poets of the past century and a half—Whitman, Breton, Césaire, Stein, Olson, Baraka, and others. He has digested and assimilated the lessons to be learned from their work while finding a way that is very much his own. The result is a distinctive contemporary voice whose angular mode of address and unerring touch edify as much as they impress.

This book presents both in full flower. Techniques of detour and indirection productively encounter an aesthetic of sampling, quotation, and juxtaposition, a language-foregrounding tack that draws a range of domains and discourses into its mix. Song titles, clichés, catch phrases, bureaucratic boilerplate, advertising jargon, office chat, song lyrics, legalese, and other components of the linguistic atmosphere we live in find their way into the work, suggesting an overmediated, gone-before-it-gets-here present.

Just for a Thrill is a substantial gathering of Jacques’ work of recent years—a welcome breakthrough book by a poet whose work has appeared mainly in little magazines and limited chapbook editions over the past dozen or so years, a poet whose work deserves greater attention. We’re fortunate to have so galvanic a collection of Jacques’ poetry in an edition that promises to reach a wider audience."
—From the foreword by Nathaniel Mackey

Geoffrey Jacques is a poet and critic whose work has been published internationally. His previous volumes of poetry are Hunger and Other Poems (1993) and Suspended Knowledge (1998). A former McDowell Colony Fellow, he is on the faculty of the English department at Lehman College. He lives in Brooklyn, New York.

Geoffrey Jacques takes you right to the middle of things: like voices overheard, these poems seem cut out of the world, 'like something we once owned.' The losses embodied define a precise politics of position, of being in a world where what the poet wants most 'is people arguing on the sidewalk.'"

– Ammiel Alcalay, Queens College, City University of New York (CUNY), author of From the Warring Factions and Memories of Our Future

Short, cryptic, rhythmic cadences weave throughout the 'language-foregrounding tack' of Geoffrey Jacques' disjunctive, compelling poetry in his new book, Just for a Thrill. Jacques' poems are filled with understated, oblique, sardonic political stiletto jabs that puncture the linguistic poetic status quo. His poems are astute with brilliant insights and right-on-the-money snapshots and observations into America's social, racial, and political world. Jacques' poems disturb with what they do and do not say, his poetic craft is always sure-footed. It is a pleasure to read his sometimes humorous, but ultimately disquieting, beautiful poems of dislocation. In this disconnected, tragic modern world of media frenzy, Jacques' poems provide us with a safe harbor from which we can observe and contemplate all the widespread ruin."

This substantial collection of poems by a longtime, well-known Detroit poet and cultural critic (now living in New York) presents socially and politically insightful poems. In a whole, Just for a Thrill is a massive critique project, a call to action. These are wise insights and earnest warnings from the pen of Geoffrey Jacques, a teacher who understands 'that friends need to be told only what they're ready to hear.'"