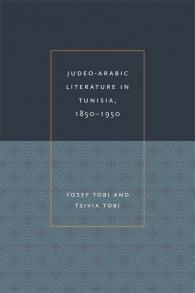 As a result of the introduction of the printing press in the mid-nineteenth century and the proximity of European culture, language, and literature after the French occupation in 1881, Judeo-Arabic literature flourished in Tunisia until the middle of the twentieth century. As the most spoken language in the country, vernacular Judeo-Arabic allowed ideas from the Jewish Enlightenment in Europe (the Haskalah) to spread widely and also offered legitimacy to the surrounding Arab culture. In this volume, authors Yosef and Tsivia Tobi present works of Judeo-Arabic Tunisian literature that have been previously unstudied and unavailable in translation.

In nine chapters, the authors present a number of works that were both originals and translations, divided by genre. Beginning each with a brief introduction to the material, they present translations of piyyutim (liturgical poems), malzumat (satirical ballads), qinot (laments), ghnayat (songs), essays on ideology and propaganda, drama and the theater, hikayat and deeds of righteous men (fiction), and Daniel Hagège’s Circulation of Tunisian Judeo-Arabic Books, an important early critical work. A comprehensive introduction details the flowering of Judeo-Arabic literature in North Africa and appendixes of Judeo-Arabic journals, other periodicals, and books complete this volume.

Ultimately, the authors reveal the effect of Judeo-Arabic literature on the spiritual formation of not only the literate male population of Tunisian Jews, who spent a good part of their time at the synagogue, but also on women, the lower and middle classes, and conservatives who leaned toward modernization. Originally published in Hebrew, Judeo-Arabic Literature in Tunisia, 1850–1950 will be welcomed by English-speaking scholars interested in the literature and culture of this period.

Yosef Tobi is professor emeritus of Medieval Hebrew poetry and former chair of the Hebrew literature department at the University of Haifa.

Tsivia Tobi is a research assistant for the Center of the Jewish Languages Research at Hebrew University. She is a native of Tunisia and a speaker of Tunisian Judeo-Arabic who received her doctorate degree in 2011.

The flowering of Judeo-Arabic culture in Tunisia has never truly drawn the attention of the Jewish studies scholars it deserved. Translated from Hebrew, this project stands as the first comprehensive study of its kind.

This is a long awaited study of the main cornerstones of popular culture of Tunisian Jewry. A product of the unique combination of personal experience and extensive academic research, the Tobis’ book is a mine of information and a source of inspiration for further investigation.

This book is an important contribution to our growing body of literature in the field of Judeo-Arabic—the language of the Jews in the Arabic-speaking world. What makes this volume so special is the careful presentation of modern Judeo-Arabic literature in North Africa in general and in Tunisia in particular. We owe the Tobis much gratitude for this significant addition to the field.

The English-language publication of Judeo-Arabic Literature in Tunisia, 1850 –1950 is a welcome step in renewing interest in the field of modern Judeo-Arabic literary studies and moreover in drawing that interest toward Tunisia’s literary contributions in particular...The evident collaboration behind this work greatly enriches it, and the volume is simultaneously readable for the uninitiated and compelling for the experienced.

– Rachel Schine, The Journal of Religion