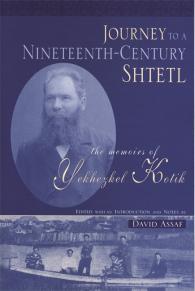 Journey to a Nineteenth-Century Shtetl

The Memoirs of Yekhezkel Kotik

Edited with an Introduction and Notes by David Assaf

What a delight to have this book now in English, with a great introduction and exemplary notes.

Originally published in Warsaw in 1913, this beautifully written memoir offers a panoramic description of the author’s experiences growing up in Kamieniec Litewski, a Polish shtetl connected with many important events in the history of nineteenth-century Eastern European Jewry. Although the way of life portrayed in this memoir has disappeared, the historical, cultural, and folkoric material it contains will be of major interest to historians and general readers alike.

Kotik’s story is the saga of a wealthy and influential family through four generations. Masterfully interwoven in this tale are colorful vignettes featuring Kotik’s family and neighbors, including rabbis and zaddikim, merchants and the poor, hasidim and mitnaggedim, scholars and illiterates, believers and heretics, matchmakers and informers, and teachers and musicians. Stories of personal warmth and despair intermingle with descriptions of the rise and decline of Jewish communal institutions and descriptions or the relationships between Jews, Russian authorities, and Polish lords. Such events as the brutal decrees of Tsar Nicholas I, the abolishment of the Jewish communal board known as the Kahal, and the Polish revolts against Russia are reflected in the lives of these people.

The English edition includes a complete translation of the first volume of memoirs and contains notes elucidating terms, names, and customs, as well as bibliographical references to the research literature. The book not only acquaints new readers with the talent of a unique storyteller but also presents an important document of Jewish life during a fascinating era.

David Assaf is a professor of Jewish history at Tel Aviv University. His books include The Regal Way: The Life and Times of Rabbi Israel of Ruzhin (1997 [Hebrew], English edition forthcoming).

Kotik's memoir has been greeted since Sholem Aleichem hailed it in 1913 as 'a treasure, a paradise.' It is both the chronicle of a community and the story of a life told by a very witty and wise participant-observer. What a delight to have this book now in English, with a great introduction and exemplary notes.

With these memoirs-adored by Sholem Aleichem-the reader can now enter and experience the real world of Eastern European Jewish life as it was lived for almost a millennium and just before modernity began to dribble in, bringing its disintegration of the collective vision of Ashkenazic Jewry. David Assaf's introduction and notes are thorough, illuminating and focus our attention on the value and treasure that are Kotik's unique memoirs.

The memoir provides a detailed picture of shtetl life in the nineteenth century...The text is carefully annotated so that the descriptions are understandable to readers without any foreknowledge of East European Jewish life and there is a fine index- a rarity in autobiographies of this type. This delightful book is very useful for any exploration of traditional Jewish religious life in Eastern Europe as well as its institutions and the way it changed. It is very readable and should arouse interest among many readers.

Kotik's Memoirs has been published in meticulous academic edition. Assaf in his comprehensive introduction informs about Kotik's biography, history of his town, analyzes literary and academic aspects of the memoirs, and shows problematic moments(especially from the perspective of memoirs as historical source), history of manuscript, and reception of the book by its contemporary readers. Large footnotes explain to the American reader details, which need Talmudic and historical knowledge. Assaf is a specialist of the subject."

Not only is it the first time that this long-celebrated work will be available in English, but also Assaf has enhanced this important text with his outstanding introduction and notes. Readers will encounter an absorbing memoir and can read it as they would read literature. At the same time, Assaf has added immeasurably to the historical value of the memoir. A fine scholar, he places the memoir in its larger context and explains elements in the text that would otherwise baffle today's reader.

I agree wholeheartedly with Sholem Aleichem, who said, 'The historical importance of this family chronicle cannot be exaggerated . . . I could not put it down!' Graced now by David Assaf's enlightening comments, Journey to a Nineteenth-Century Shtetl will be read eagerly by everyone interested in the Jewish experience in Eastern Europe.