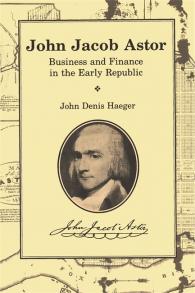 Business and Finance in the Early Republic

John Jacob Astor was the best-known and most important American businessman for more than a half-century. His career encompassed the country's formative economic years from the precarious days following the American Revolution to the emergence of an urban-centered manufacturing economy in the late 1840s. Change was the dominant motif of the period, and Astor either exemplified the varied economic, social, and political changes in his business career or he directly affected the course of events.

In this biography of John Jacob Astor, John Denis Haeger uses Astor's life and his career as a merchant, fur trader, and land speculator as vehicles for examining several important themes and issues in American economic and urban development between 1790 and 1860. Haeger addresses, in fascinating detail, the complexity of Astor's business endeavors, his extensive connections with the country's dominant political figures, and the "modern" business strategies and managerial techniques that he used to build his business empire.

Astor was clearly not a business revolutionary who radically altered an existing system. He was, however, an entrepreneur who exerted a profound change on an industry. He fascinated his contemporaries precisely because he so mirrored his age and its changing business and economic patterns. He grasped the greater size and complexity of an emerging commercial economy in post-Revolutionary America and adopted strategies and structures that transformed the fur and China trades. His investment in city real estate, stocks, bonds, and even a western city made him part of America's evolution into an urbanindustrial society. For his era, John Astor's career was remarkable for its modernity, vision, and reflection of American economic and political values.

More than just a personal biography, John Jacob Astor combines economic theories with a fascinating narrative that demonstrates, like no other book has, Astor's impact on the early republic.

John Denis Haeger is a professor of history, assistant vice president for research, and dean in the School of Graduate Studies at Central Michigan University. He is a founder and former editor of Michigan Historical Review and the author of The Investment Frontier: New York Businessmen and the Economic Development of the Northwest. Haeger earned his Ph.D. from Loyola University in Chicago.