Home » Books » John E. Fetzer and the Quest for the New Age 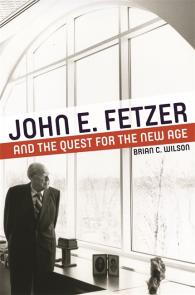 John E. Fetzer and the Quest for the New Age

John E. Fetzer and the Quest for the New Age follows the spiritual sojourn of John E. Fetzer, a Michigan business tycoon. Born in 1901 and living most of his life in Kalamazoo, Fetzer parlayed his first radio station into extensive holdings in broadcasting and other enterprises, leading to his sole ownership of the Detroit Tigers in 1961. By the time he died in 1991, Fetzer had been listed in Forbes magazine as one of the four hundred wealthiest people in America. And yet, business success was never enough for Fetzer—his deep spiritual yearnings led him from the Christianity of his youth to a restless exploration of metaphysical religions and movements ranging from Spiritualism, Theosophy, Freemasonry, UFOology, and parapsychology, all the way to the New Age as it blossomed in the 1980s.

Author Brian C. Wilson demonstrates how Fetzer’s quest mirrored those of thousands of Americans who sought new ways of thinking and being in the ever-changing spiritual movements of the twentieth century. Over his lifetime, Fetzer's worldview continuously evolved, combining and recombining elements from dozens of traditions in a process he called "freedom of the spirit." Unlike most others who engaged in a similar process, Fetzer’s synthesis can be documented step by step using extensive archival materials, providing readers with a remarkably rich and detailed roadmap through metaphysical America. The book also documents how Fetzer’s wealth allowed him to institutionalize his spiritual vision into a thriving foundation—the Fetzer Institute—which was designed to carry his insights into the future in hopes that it would help catalyze a global spiritual transformation.

John E. Fetzer and the Quest for the New Age offers a window into the rich and complex history of metaphysical religions in the Midwest and the United States at large. It will be read with interest by those wishing to learn more about this enigmatic Michigan figure, as well as those looking for an engaging introduction into America’s rapidly shifting spiritual landscape.

Brian C. Wilson is professor of American Religious History in the Department of Comparative Religion at Western Michigan University. He is the author of Dr. John Harvey Kellogg and the Religion of Biologic Living and Yankees in Michigan.

This is a nuanced religious biography of a pioneer of radio, a major philanthropist, and a well-known Michigan personality who sought a monistic spirituality receptive to subtle conscious energies that he considered to be as real as radio waves, electricity, and radiation. It is also a near-encyclopedic map of the eclectic American esoteric and an erudite exploration of a New Age to which we have not paid nearly enough attention: one emerging from and expressive of esoteric Christian piety, business, patriotism, civic responsibility, and a distinctly metaphysical Midwest. Highly original and genuinely pioneering through and through.

– Jeffrey J. Kripal, author of Esalen: America and the Religion of No Religion

Brian Wilson’s book vividly and astutely traces the life of businessman and philanthropist John E. Fetzer, whose journey combined the distinctly American story of a spiritual seeker with the personal quest for a deeper meaning of freedom. The John Fetzer Wilson describes shines forth as an energetic, great-hearted man utterly open to the wonder and miracle of life. He shows how the spiritual journey of one twentieth-century soul crosses the threshold into the human future.

This surprising spiritual biography grounds Michigan businessman John Fetzer’s life and ideas in the New Age movement. Wilson is a master storyteller whose careful attention to detail fills this biography with fascinating connections to the religious groups and movements that populated the twentieth-century Great Lakes region. Beautifully written, this book is a remarkable achievement.

John E. Fetzer was a nationally recognized businessman on a private spiritual search. This book annotates and reveals his entire spiritual story, while documenting significant esoteric movements. It’s an excellent resource to help understand and integrate our common quest to awaken to love.

This is a well-written and meticulously researched overview of spiritual exploration outside the mainstream in twentieth-century America and a skillful explanation of how various strains of belief came together to form what became known as New Age religion. John Fetzer and the Quest for the New Age unearths a complex landscape of nontraditional spiritual actors and institutions, constructed behind the more familiar infrastructure of churches, temples, and mosques.

– Evelyn Sterne, associate professor of history, University of Rhode Island, and author of Ballots and Bibles: Ethnic Politics and the Catholic Church in Providence

This is an important biography. By giving us Fetzer’s spiritual biography, Brian Wilson presents something like a condensed history of alternative, metaphysical, spiritualist, and New Age religion in the twentieth century. Fetzer was a remarkable figure, and this book demonstrates just how unusual a figure he really was while at the same time showing how Fetzer’s life was the confluence of many major and less well-known religious figures and movements.

Brian Wilson has written the indispensable biography of John E. Fetzer. He illumines Fetzer's extraordinary explorations of mystical and spiritual traditions. His judgements are judicious. Deploying his exhaustive research, his touch is light and sure. This is the definitive biography of this remarkable man. It will remain required reading for anyone seeking to understand the man, his inner life, and his philanthropic legacy.

John Fetzer is best remembered as a communications magnate who owned the Detroit Tigers and became one of the wealthiest persons in America. Until now little has been known about his lifelong spiritual journey, from Seventh-day Adventism to spiritualism. In this sympathetic but balanced book Brian C. Wilson brings Midwestern metaphysical religion to life.

– Ronald L. Numbers, Hilldale Professor Emeritus of the History of Science and Medicine at the University of Wisconsin-Madison

A seminal work of original and definitive scholarship, "John E. Fetzer and the Quest for the New Age" is an extraordinary study and an inherently fascinating one.

John E. Fetzer and the Quest for the New Age is a thought-provoking, well-researched biography of an exceptionally successful businessman that follows the growth of his spiritual beliefs.

Clearly written, well organized with endnotes, bibliography and index, Fetzer is a good example of tightly focused, documented historiography. Students in various disciplines could benefit from its form and structure. Parts of it would fit well in an introduction to American religions course; other aspects are really interesting only to specialists in esotericism or enthusiastic Michiganders.

Fetzer was (rightly) concerned about revealing too much about his interests in public. He was certainly open-minded and willing to not only consider, but also try new ideas. Wilson makes no snide remarks and in spite of some concerns about potential bias I believe he has tried to tell the fascinating story about Fetzer faithfully, thus I do not mind recommending this book.

– Nemo C. Mörck, Journal of the Society for Psychical Research

Wilson embeds thorough discussions of these new movements within a zippy narrative. The main text clocks in at a brisk 218 pages, and theoretical terms are explained clearly. Teachers who want to assign an undergraduate primer on metaphysics will find this book useful.

Brian C. Wilson interview on Bright Side with Tekneshia (August 7, 2018)