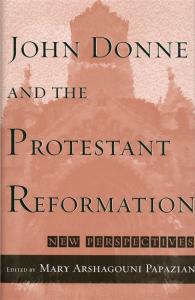 John Donne and the Protestant Reformation

This collection of essays might be seen as a landmark in Donne studies. In many respects—argument, contributors, methodology—it sums up the dominant revisionist trends in Donne scholarship over the past fifteen years.

The early transition from Catholicism to Protestantism was a complicated journey for England, as individuals sorted out their spiritual beliefs, chose their political allegiances, and confronted an array of religious differences that had sprung forth in their society since the reign of Henry VIII. Inner anxieties often translated into outward violence. Amidst this turmoil the poet and Protestant preacher John Donne (1572–1631) emerged as a central figure, one who encouraged peace among Christians. Raised a Catholic but ordained in 1615 as an Anglican clergyman, Donne publicly identified himself with Protestantism, and yet scholars have long questioned his theological orientation. Drawing upon recent scholarship in church history, the authors of this collection reconsider Donne’s relationship to Protestantism and clearly demonstrate the political and theological impact of the Reformation on his life and writings.

The collection includes thirteen essays that together place Donne broadly in the context of English and European traditions and explore his divine poetry, his prose work, the Devotions Upon Emergent Occasions, and his sermons. It becomes clear that in adopting the values of the Reformation, Donne does not completely reject everything from his Catholic background. Rather, the clash of religion erupts in his work in both moving and disconcerting ways. This collection offers a fresh understanding of Donne’s hard-won irenicism, which he achieved at great personal and professional risk.

Mary Arshagouni Papazian is an Associate Professor of English and Associate Dean in the College of Arts and Sciences at Oakland University.

This collection of essays might be seen as a landmark in Donne studies. In many respects-argument, contributors, methodology-it sums up the dominant revisionist trends in Donne scholarship over the past fifteen years."

John Donne and the Protestant Reformation is timely, richly varied, and always learned. The book includes an impressive gathering of internationally known scholars who, reading Donne's life, poetry, sermons, and prose, enable us to better understand both the vexing features of religious controversy in the early modern era and Donne's particular relationship to it."

Mary Papazian has assembled a collection that has a forceful overarching perspective: these essays will prompt us to explore the astonishing fact that, in his maturity, Donne entered the public sphere by attuning his richly skeptical and fertile mind to the resources made available within early Protestantism."

18 hours 25 min ago
Hey #movementdetroit fans! WSUPress's TECHNO REBELS is a great way to relive the excitement of @MovementDetroit all… https://t.co/f4nPn8uYj0
1 day 18 hours ago
Check out Cindy Hunter Morgan's new book at https://t.co/o1mzeoKv1M https://t.co/6W9FLg0RLa
2 days 21 hours ago
Wayne State University President M. Roy Wilson with his teacher in high school. Check out this image and many more… https://t.co/W3kp1D7dFX