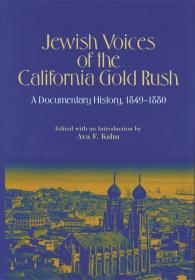 Edited with an Introduction by Ava F. Kahn

I cannot praise this exhaustively researched, elegantly designed, and amply annotated narrative anthology highly enough… This anthology will represent a major contribution to the history of the California Gold Rush as well as the history of Jews in the United States.

In 1848, news of the California Gold Rush swept the nation and the world. Aspiring miners, merchants, and entrepreneurs from all corners of the globe flooded California looking for gold. The cry of instant wealth was also heard and answered by Jewish communities in Europe and the eastern United States. While all Jewish immigrants arriving in the mid-nineteenth century were looking for religious freedoms and economic stability, there were preexisting Jewish social and religious structures on the East Coast. California’s Jewish immigrants become founders of their own social, cultural, and religious institutions.

Jewish Voices of the California Gold Rush examines the life of California’s Jewish community through letters, diaries, memoirs, court and news reports, and photographs, as well as institutional, synagogue, and organizational records. By gathering a wealth of primary source materials—both public and private documents—and placing them in proper historical context, Ava F. Kahn re-creates the lives within California’s Jewish community.

Kahn takes the reader from Europe to California, from the goldfields to the developing towns and their religious and business communities, and from the founding of Jewish communities to their maturing years—most notably the instant city of San Francisco. By providing exhaustive documentation, Kahn offers an intimate portrait of Jewish life at a critical period in the history of California and the nation. Scholars and students of Jewish history and immigration studies, and readers interested in Gold Rush history, will enjoy this look at the development of California’s Jewish community.

I cannot praise this exhaustively researched, elegantly designed, and amply annotated narrative anthology highly enough. . . . This anthology will represent a major contribution to the history of the California Gold Rush as well as the history of Jews in the United States."

The book was a true labor of love for the Oakland-based teacher and historian...her new book is her pride and joy...with a cast of characters like that, how can Ava Kahn not go back for more?

Kahn provides an excellent bibliographical essay in Jewish Voices of the California Gold Rush, but it's icing on the cake when compared to the richness of the book's documents. Ava Kahn's fine editorial work, the selections themselves, and their vivid descriptions make this work a basic source for anyone interested in learning of the roles Jews played in the Gold Rush, as a source for research into the topic, or just for the pleasure of reading so many eyewitness descriptions from a Jewish point of view. The book is a valuable addition to a growing body of work on Jews in the West."

In amassing the most important original sources in one volume, in presenting them in a clear and systematic manner, and in effectively employing her documents to elucidate the major issues in the field, Ava Kahn has accomplished an enormous amount. Jewish Voices will doubtless aid and influence the narrative and interpretive histories that come after it. Kahn has raised the odds that that Jews of the Gold Rush will eventually receive the attention they are due.

5 min 48 sec ago
TONIGHT! Join @stephanie_heit at @ShopBooksweet for local author's night! https://t.co/pTny5OErDe
21 hours 49 min ago
Have you had a chance to check out our new Spring & Summer 2023 Catalog?! From a new lyric essay collection to a p… https://t.co/cNAo9WjL9K
1 day 20 hours ago
RT @shondabuchanan: Tonight! Feb. 1, 2023, 6:30pm Mountain Time -- Virtual reading for #lewisandclarklibrary Lewis & Clark Library in H… https://t.co/UAmMoIlq1w