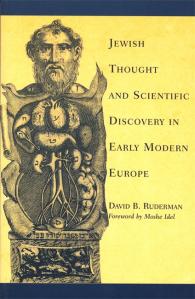 Jewish Thought and Scientific Discovery is pioneering in this examination of scientific discourse in the dynamic and fascinating period of early modern Jewish history.

Jewish Thought and Scientific Discovery in Early Modern Europe is a major contribution in understanding the cultural processes involved in the emergence and development of the consumer phase of science. It covers many Jewish authors and their writings from the middle of the 16th until the late 18th centuries in Europe. The book's combined approach to the history of science and Jewish thought strongly emphasises analysis of the mentalities that informed some of the prominent figures of Jewish thought in this time period. Jewish Thought and Scientific Discovery in Early Modern Europe takes a comprehensive look at the processes taking place in the minds of European Jewish intellectuals in Italy, Amsterdam, Prague, and London. The main purpose of this book is the description of the modalities of reception of the new sciences, complicated by the traditional reticence toward "alien sciences" found in many medieval Jewish writers still influential in the early modern period.

David B. Ruderman is a professor of modern Jewish history and the director of the Center for Advanced Judaic Studies at the University of Pennsylvania. His most recent book is Jewish Enlightenment in an English Key: Anglo-Jewry's Construction of Modern Jewish Thought (Princeton University Press, 2000).

17 hours 42 min ago
Hey #movementdetroit fans! WSUPress's TECHNO REBELS is a great way to relive the excitement of @MovementDetroit all… https://t.co/f4nPn8uYj0
1 day 18 hours ago
Check out Cindy Hunter Morgan's new book at https://t.co/o1mzeoKv1M https://t.co/6W9FLg0RLa
2 days 20 hours ago
Wayne State University President M. Roy Wilson with his teacher in high school. Check out this image and many more… https://t.co/W3kp1D7dFX