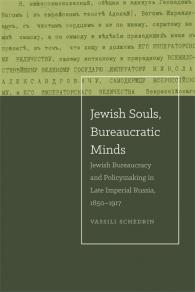 Jewish Souls, Bureaucratic Minds examines the phenomenon of Jewish bureaucracy in the Russian empire—its institutions, personnel, and policies—from 1850 to 1917. In particular, it focuses on the institution of expert Jews, mid-level Jewish bureaucrats who served the Russian state both in the Pale of Settlement and in the central offices of the Ministry of Internal Affairs in St. Petersburg. The main contribution of expert Jews was in the sphere of policymaking and implementation. Unlike the traditional intercession of shtadlanim (Jewish lobbyists) in the high courts of power, expert Jews employed highly routinized bureaucratic procedures, including daily communications with both provincial and central bureaucracies.

Vassili Schedrin illustrates how, at the local level, expert Jews advised the state, negotiated power, influenced decisionmaking, and shaped Russian state policy toward the Jews. Schedrin sheds light on the complex interactions between the Russian state, modern Jewish elites, and Jewish communities. Based on extensive new archival data from the former Soviet archives, this book opens a window into the secluded world of Russian bureaucracy where Jews shared policymaking and administrative tasks with their Russian colleagues. The new sources show these Russian Jewish bureaucrats to be full and competent participants in official Russian politics. This book builds upon the work of the original Russian Jewish historians and recent historiographical developments, and seeks to expose and analyze the broader motivations behind official Jewish policy, which were based on the political vision and policymaking contributions of Russian Jewish bureaucrats.

Scholars and advanced students of Russian and Jewish history will find Jewish Souls, Bureaucratic Minds to be an important tool in their research.

Dr. Vassili Schedrin is Alfred and Isabel Bader Postdoctoral Fellow at Queen's University in Kingston, Ontario. His current research projects include the history of nineteenth-century Jewish historiography in the Russian language and the biography of Solomon Mikhoels, beloved actor of Yiddish stage and unofficial leader of Soviet Jews.

Jewish Souls, Bureaucratic Minds significantly revises the narrative of Russian Jewry as victims of tsarist discrimination by exploring the neglected institution of ‘expert Jews’ who worked behind the scenes to mediate between the modernizing imperial state and the Jews. This pathbreaking book highlights how ‘expert Jews’ both embraced the new service ethos of enlightened bureaucracy and demonstrated a commitment to Jewish life.

This book opens up a new field for study. It has much to offer students of religion in general and especially specialists in Russia and in Judaism.

I welcome this very interesting book which examines the role of "expert Jews" in the Russian imperial bureaucracy while also explaining how those roles changed during the tumultuous seventy-seven last years of the imperial regime.

Schedrin's book is very well written, and reveals a great deal of new and interesting information about expert Jews and Jewish life in Russia. The author avoids only negative or only positive evaluations of the expert Jews. Instead, he depicts them and their relations with the authorities and the rest of the Jewish population in all of its complexity. Schedrin shows the contradictions and conflicts of interests that existed between expert Jews and Orthodox Jews. The book is very important for understanding the Jewish history of the late Russian empire and will greatly benefit scholars as well as the lay audience.

Schedrin effectively conveys a transitional period in Ressuain Jewry and the painful conflict of a hybrid identity.