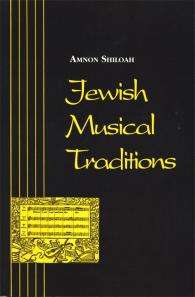 Jewish Musical Traditions is the first English-language volume to consider oral music of Jewish communities in a sociocultural context. Amnon Shiloah, the world's leading authority on the Arab and Jewish musical traditions, tells a musical story voiced the world over by men and women in synagogues and homes, mirroring the life of an ancient
people exiled from its land. The story began in Biblical times and encompasses two thousand years, during which a widely dispersed people have tried to preserve their cultural values in complex and horrific situations.
Such an excursion into the world of sounds resonating from many traditions presents problems. Shiloah faced questions concerning the impact that long-term
exposure to strange local musical cultures may have had on the preservation of ancient traditions the Jews took with them as they moved from place to place. The dearth of musical documentation on which to base definitive argumentation further complicates the picture.

To cope with these diverse problems, the author considers the musical heritage as only one element in the value system informing an individual's world outlook and perception of the destiny of the Jewish people. Hence, he discusses the manner in which this musical heritage meshes with the complex web of Jewish history by way of central themes such as the relation of music to religion, music
and the world of the Kabbalah, and music in communal life. Shiloah considers technical and theoretical approaches, as well as art music, folk music, and performance practices of poets, vocalists, instrumentalists, and dancers.

Amnon Shiloah is the author of the monumental volume The Theory of Music in Arabic Writings, The Musical Subjects in the Zohar, The jewish-Iraqi Musical Tradition, and a four-volume set in Hebrew on the musical traditions of Jewish communities. Currently a
professor of musicology at the Hebrew
University of Jerusalem, he earned his Ph.D. from the Sorbonne.

3 hours 35 min ago
Happy Pub Date to THE SPOOK WHO SAT BY THE DOOR, SECOND EDITION! This new edition of a literary classic now includ… https://t.co/XrCsLZvf4D
3 hours 39 min ago
RT @DarkProjections: Returned from a great two weeks in Europe to find copies of my new book! Kolchak:The Night Stalker, one of the Pion… https://t.co/kPJ5kKLRyr
1 day 35 min ago
RT @oneitadetroit: Thrilled that @WSUPress is releasing the 2E of Sam Greenlee's "The Spook Who Sat by the Door" tomorrow. Introductio… https://t.co/hZpAjxluIl