Home » Books » Jewish Magic before the Rise of Kabbalah 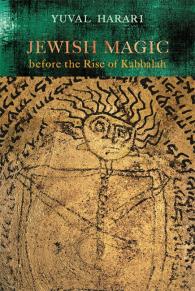 Jewish Magic before the Rise of Kabbalah

"Magic culture is certainly fascinating. But what is it? What, in fact, are magic writings, magic artifacts?" Originally published in Hebrew in 2010, Jewish Magic Before the Rise of Kabbalah is a comprehensive study of early Jewish magic focusing on three major topics: Jewish magic inventiveness, the conflict with the culture it reflects, and the scientific study of both.

The first part of the book analyzes the essence of magic in general and Jewish magic in particular. The book begins with theories addressing the relationship of magic and religion in fields like comparative study of religion, sociology of religion, history, and cultural anthropology, and considers the implications of the paradigm shift in the interdisciplinary understanding of magic for the study of Jewish magic. The second part of the book focuses on Jewish magic culture in late antiquity and in the early Islamic period. This section highlights the artifacts left behind by the magic practitioners—amulets, bowls, precious stones, and human skulls—as well as manuals that include hundreds of recipes. Jewish Magic before the Rise of Kabbalah also reports on the culture that is reflected in the magic evidence from the perspective of external non-magic contemporary Jewish sources.

Issues of magic and religion, magical mysticism, and magic and social power are dealt with in length in this thorough investigation. Scholars interested in early Jewish history and comparative religions will find great value in this text.

Yuval Harari is a professor of Jewish Thought and Folklore at Ben-Gurion University of the Negev. His cultural and textual studies cover a broad range of phenomena in the field of magic and practical Kabbalah in Judaism from Antiquity to our day. He is also the author of The Sword of Moses: A New Translation and Study.

The author brings to bear an impressively wide range of theoretical perspectives on the artifacts, words, and ceremonies of magic, and with these he builds up a picture of early Jewish magic as a culture that can be viewed from within (the surviving gems, adjuration bowls, spell skulls, magic recipes, etc.) and without (the contemporary accounts of magic by historians and theologians).

– Charles Burnett, professor of the history of Arabic/Islamic influence in Europe at the Warburg Institute at University of London

This is a book that can serve as both an introduction to and a summary of a fascinating topic. It is highly recommended as a charming guidebook to the realm of magic.

What do we mean by ‘Jewish magic’? In this wide-ranging and richly documented book, Yuval Harari captures generations of scholars wrestling with this question while offering some important observations himself on the power of language, the nature of magical texts, Jewish traditions of sorcery, and the shared ‘magical culture’ of the late antique Near East.

Harari’s combination of textual skills and theoretical sophistication make this book an outstanding contribution to the study of early Jewish magic, ritual studies, and Greco-Roman culture. It includes a valuable discussion of theories and methods in the study of magic and the relevance of Jewish magic for the history of religions.

– Michael Swartz, professor of Hebrew and religious studies at the Ohio State University

Harari's book is a scholarly tour de force. It constitutes the most comprehensive and incisive presentation and analysis of a topic long ignored in studies of ancient and early medieval Judaism.

Jewish Magic Before the Rise of Kabbalah serves as an excellent introduction to the [academic study of Jewish magic].

The work represents an excellent critical introduction to the scholarly study of magical practices in general, from which anybody tackling the issue either anthropologically, historically, or philologically could benefit. Jewish Magic before the Rise of Kabbalah complements all the other case syntheses on individual Jewish magical texts and demonstrates the complexity of the field of study.

In its excellent account of the historical treatment of the subject and its persuasive apology for a family resemblance approach to defining and understanding the relationships between the categories of magic and religion, Harari’s work is a significant contribution to the field and will be an important catalyst for many developments in the future.