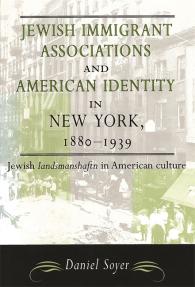 Landsmanshaftn, associations of immigrants from the same hometown, became the most popular form of organization among Eastern European Jewish immigrants to the United States in the late 19th and early 20th centuries. Jewish Immigrant Associations and American Identity in New York, 1880–1939, by Daniel Soyer, holds an in-depth discussion on the importance of these hometown societies that provided members with valuable material benefits and served as arenas for formal and informal social interaction. In addition to discussing both continuity and transformation as features of the immigrant experience, this approach recognizes that ethnic identity is a socially constructed and malleable phenomenon. Soyer explores this process of construction by raising more specific questions about what immigrants themselves have meant by Americanization and how their hometown associations played an important part in the process.

Daniel Soyer is professor in the department of History at Fordham University and former archivist at the YIVO Institute for Jewish Research.