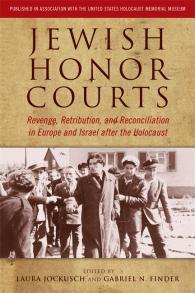 Revenge, Retribution, and Reconciliation in Europe and Israel after the Holocaust

In the aftermath of World War II, virtually all European countries struggled with the dilemma of citizens who had collaborated with Nazi occupiers. Jewish communities in particular faced the difficult task of confronting collaborators among their own ranks—those who had served on Jewish councils, worked as ghetto police, or acted as informants. European Jews established their own tribunals—honor courts—for dealing with these crimes, while Israel held dozens of court cases against alleged collaborators under a law passed two years after its founding. In Jewish Honor Courts: Revenge, Retribution, and Reconciliation in Europe and Israel after the Holocaust, editors Laura Jockusch and Gabriel N. Finder bring together scholars of Jewish social, cultural, political, and legal history to examine this little-studied and fascinating postwar chapter of Jewish history.

The volume begins by presenting the rationale for punishing wartime collaborators and purging them from Jewish society. Contributors go on to examine specific honor court cases in Allied-occupied Germany and Austria, Poland, the Netherlands, and France. One essay also considers the absence of an honor court in Belgium. Additional chapters detail the process by which collaborators were accused and brought to trial, the treatment of women in honor courts, and the unique political and social place of honor courts in the nascent state of Israel. Taken as a whole, the essays in Jewish Honor Courts illustrate the great caution and integrity brought to the agonizing task of identifying and punishing collaborators, a process that helped survivors to reclaim their agency, reassert their dignity, and work through their traumatic experiences.

For many years, the honor courts have been viewed as a taboo subject, leaving their hundreds of cases unstudied. Jewish Honor Courts uncovers this forgotten chapter of Jewish history and shows it to be an integral part of postwar Jewish rebuilding. Scholars of Jewish, European, and Israeli history as well as readers interested in issues of legal and social justice will be grateful for this detailed volume.

Laura Jockusch is Martin Buber Society Fellow in Jewish History at the Hebrew University of Jerusalem. She is the author of Collect and Record! Jewish Holocaust Documentation in Early Postwar Europe. She teaches in the International M.A. Program in Holocaust Studies at the University of Haifa.

Gabriel N. Finder is Ida and Nathan Kolodiz Director of Jewish Studies and an associate professor in the Department of Germanic Literatures and Languages at the University of Virginia. He is coeditor of Making Holocaust Memory.

An excellent and genuinely novel collection. In exploring the role that Jewish honor courts played in bringing collaborators of the Holocaust to justice, the essays in this path-breaking book illuminate a fascinating and neglected subject. Will be of vital interest to students of the Holocaust and to all persons concerned with the vexed issue of bringing persons implicated in atrocities to account.

– Lawrence Douglas, James J. Grosfeld Professor of Law, Jurisprudence, and Social Thought at Amherst College and author of The Memory of Judgment and The Vices

The transnational comparative aspect of the volume is especially welcome, and to date it is the first volume of its kind to undertake such a crucial examination of this topic by a collection of excellent scholars doing top-notch archival research in all the necessary languages.

This important and well-researched collection of essays provides a comprehensive account of the attempts of Jews in Europe and Israel to come to terms with what was seen as Jewish ‘collaboration’ with the Nazis during the Second World War. It is essential reading for all interested in the Holocaust and its aftermath.

[. . .] the volume provides a welcome and well-researched collection of essays on a neglected topic, and will be useful for scholars and students interested in the Holocaust and its aftermath.

One of the most interesting aspects presented in the volume are the voices of the collaborators, or their explanations and justifications.

If only the haggard survivors of Nazi crimes, Jews in particular, had had access to the literature of the past decade or two, they would have realized that resistance, collaboration, and guilt cannot be effectively assigned and that their efforts to identify and punish those who betrayed them were actually about the need, in the words of the editors of this outstanding volume, to "reclaim agency," "reassert their dignity," and "work through their traumatic pasts" (22). This collection of deeply-researched essays fortunately also provides readers contemporaneous understandings of what the participants thought they were doing and why. In some perverse way, the self- image of Jews as a "collective of victims" (138) could only be overcome by identifying villains as well as heroes.

The contributors to this volume approach the topic from different perspectives: Jewish Studies, political, social and cultural history, law, literature and memory studies. Based on trial records, published and unpublished testimonies, diaries, newspapers and scholarly literature, this book is an important contribution to the history of Jewish retribution. Recommended to all libraries.

5 days 10 hours ago
Wayne State University Press is excited to announce the redesign of our TV Milestones Series! For more info on the… https://t.co/t5iKM1qXje
1 week 4 days ago
Hey @waynestate Warriors! Don't forget to show your One Card and save 30% off your order at @WSUPress! Details a… https://t.co/dVkj0eylOc
4 weeks 1 day ago
RT @waynestatealum: Joseph Harris (@PrinceLanzen) is a 2013 @WayneStateCLAS alum. His debut book, You’re in the Wrong Place, was publis… https://t.co/tPMo8Hs5vi