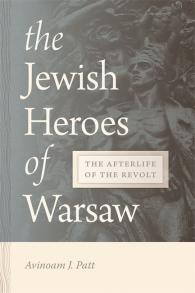 The Jewish Heroes of Warsaw

The Afterlife of the Revolt

The Jewish Heroes of Warsaw: The Afterlife of the Revolt by Avinoam J. Patt analyzes how the heroic saga of the Warsaw Ghetto Uprising was mythologized in a way that captured the attention of Jews around the world, allowing them to imagine what it might have been like to be there, engaged in the struggle against the Nazi oppressor. The timing of the uprising, coinciding with the transition to memorialization and mourning, solidified the event as a date to remember both the heroes and the martyrs of Warsaw, and of European Jewry more broadly.

The Jewish Heroes of Warsaw includes nine chapters. Chapter 1 includes a brief history of Warsaw from 1939 to 1943, including the creation of the ghetto and the development of the Jewish underground. Chapter 2 examines how the uprising was reported, interpreted, and commemorated in the first year after the revolt. Chapter 3 concerns the desire for first-person accounts of the fighters. Chapter 4 examines the ways the uprising was seized upon by Jewish communities around the world as evidence that Jews had joined the struggle against fascism and utilized as a prism for memorializing the destruction of European Jewry. Chapter 5 analyzes how memory of the uprising was mobilized by the Zionist movement, even as it debated how to best incorporate the doomed struggle of Warsaw’s Jews into the Zionist narrative.Chapter 6 explores the aftermath of the war as survivors struggled to come to terms with the devastation around them. Chapter 7 studies how the testimonies of three surviving ghetto fighters present a fascinating case to examine the interaction between memory, testimony, politics, and history. Chapter 8 analyzes literary and artistic works, including Jacob Pat’s Ash un Fayer, Marie Syrkin, Blessed is the Match, and Natan Rapoport’s Monument to the Ghetto Fighters, among others.

As this book demonstrates, the revolt itself, while described as a "revolution in Jewish history," did little to change the existing modes for Jewish understanding of events. Students and scholars of modern Jewish history, Holocaust studies, and European studies will find great value in this detail-oriented study.

Avinoam J. Patt is the Doris and Simon Konover Professor of Judaic Studies and director of the Center for Judaic Studies and Contemporary Jewish Life at the University of Connecticut. He is the author of Finding Home and Homeland: Jewish Youth and Zionism in the Aftermath of the Holocaust (Wayne State University Press, 2009) and co-editor of a new volume Laughter After: Humor and the Holocaust (Wayne State University Press, 2020).

With The Jewish Heroes of Warsaw, Avinoam Patt takes his place among the ranks of the top Holocaust scholars on the academic scene today. In this deeply researched, sharply thought out, and skillfully written book, Patt provides a way for readers, both within and outside the academy, to learn about this much-mythologized event and this iconic place in public memory.

Patt has produced a detailed and well-written account tracing these different commemorative narratives of this epic event, revealing the conflicts and complexities of memory work. He highlights the overriding imperative of ensuring the future of the Jewish people and forging a meaning of the tragic and heroic past. In this impressive work, Patt weaves together a tapestry of the postwar political, emotional, and cultural narratives of the uprising which enables readers to reflect on how history is used to create meaning in the present.

– Dalia Ofer, Max and Rita Haber Professor of Holocaust and East European Studies at the Avraham Harman Institute of Contemporary Jewry at the Hebrew University of Jerusalem

This is the best account of one of the major pillars of Jewish collective memory of the Holocaust, the Warsaw Ghetto Uprising of 1943. Patt offers a superb analysis of a fraught and complex story: how the uprising was interpreted in a postwar Jewish world that struggled to recover from a national catastrophe.

– Samuel D. Kassow, Charles Northam Professor of History at Trinity College and author of Who Will Write Our History: Rediscovering a Hidden Archive from the Warsaw Ghetto

As this new and detailed account reveals, already during the war the Warsaw Ghetto Uprising of 1943 became a worldwide symbol of Jewish resistance, while at the same time Jewish organizations abroad struggled to respond to the news of the Nazi extermination campaign in occupied Poland. Enabled by a close reading of an abundance of original sources, Patt aptly illuminates the contested political makings of The Jewish Heroes of Warsaw by survivors and Jewish factions in Palestine/Israel, Poland, and the United States during the first decade after the uprising and even today.

The Jewish Heroes of Warsaw provides a comprehensive overview of the complex ties between Zionism and the Holocaust and of the Holocaust's central place in the life of the State of Israel. Avinoam Patt's brilliant analysis challenges accepted notions of nationalism, identity, and commemoration and offers new insights and understandings.

– Hava Dreifuss, historian of the Holocaust in Eastern Europe at the Department of Jewish History at Tel-Aviv University

16 min 47 sec ago
If the @nypl says this book is great, then it must be true! NOTHING SPECIAL is buddy story that spans generations,… https://t.co/oAnscfOnMr
20 min 58 sec ago
@jennycaplan @BradNorrDesign does amazing work!
1 day 14 min ago
Just in time for CYBER MONDAY! Get 30% off all WSU Press books with code HOL2 at checkout! https://t.co/FxRR36Oujc