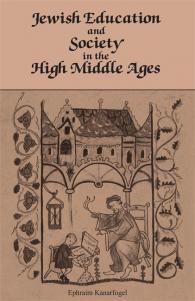 Jewish Education and Society in the High Middle Ages

The Jews of northern France, Germany, and England, known collectively as Ashkenazic Jewry, have commanded the attention of scholars since the beginnings of modern Jewish historiography. Over the past century, historians have produced significant studies about Jewish society in medieval Ashkenaz that have revealed them as a well-organized, creative, and steadfast community. Indeed, the Franco-Russian Jewry withstood a variety of physical, political, and religious attacks in the twelfth and thirteenth centuries to produce an impressive corpus of Talmudic and halakhic compositions, known collectively as Tosafot, that revolutionized the study of rabbinic literature.

Although the literary creativity of the Tosafists has been documented and analyzed, and the scope and policies of communal government in Ashkenaz have been fixed and compared, no sustained attempt has been made to integrate these crucial dimensions. Jewish Education and Society in the High Middle Ages considers these relationships by examining the degree of communal involvement in the educational process, as well as the economic theories and communal structures that affected the process from the most elementary level to the production of the Tosafist corpus. By drawing parallels and highlighting differences to pre-Crusade Ashkenaz, the period following the Black Death, Spanish and Provençal Jewish society, and general medieval society, Ephraim Kanarfogel creates an insightful and compelling portrait of Ashkenazic society.

Available in paperback for the first time with a new preface included, Jewish Education and Society in the High Middle Ages will be a welcome addition to the libraries of Jewish studies scholars and students of medieval religious literature.

Ephraim Kanarfogel is E. Billi Ivry Professor of Jewish History, chairman of the Rebecca Ivry Department of Jewish Studies, and director of the Graduate Program for Women in Advanced Talmudic Studies at the Stern College for Women, Yeshiva University.

1 day 1 hour ago
RT @oneitadetroit: Thrilled to announce @WSUPress is releasing the 2E of Sam Greenlee's "The Spook Who Sat by the Door" on Tuesday. In… https://t.co/H7WrVLnlLw
2 days 2 hours ago
With just ONE WEEK left of #PrideMonth, make sure you grab your copy or e-book of any of our @queer_screens titles!… https://t.co/bDWFdJgo1S
3 days 17 min ago
Now available as an e-book for the first time! https://t.co/l4kjSuHhCU