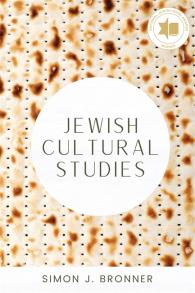 Jewish Cultural Studies charts the contours and boundaries of Jewish cultural studies and the issues of Jewish culture that make it so intriguing—and necessary—not only for Jews but also for students of identity, ethnicity, and diversity generally. In addition to framing the distinguishing features of Jewish culture and the ways it has been studied, and often misrepresented and maligned, Simon J. Bronner presents several case studies using ethnography, folkloristic interpretation, and rhetorical analysis. Bronner, building on many years of global cultural exploration, locates patterns, processes, frames, and themes of events and actions identified as Jewish to discern what makes them appear Jewish and why.

Jewish Cultural Studies is divided into three parts. Part 1 deals with the conceptualization of how Jews in complex, heterogenous societies identify themselves as a cultural group to non-Jews and vice versa—such as how the Jewish home is socially and materially constructed. Part 2 delves into ritualization as a strategic Jewish practice for perpetuating peoplehood and the values that it suggests—for example, the rising popularity of naming ceremonies for newborn girls, simhat bat or zeved habat, in the twenty-first century. Part 3 explores narration, including the global transformation of Jewish joking in online settings and the role of Jews in American political culture.

Bronner reflects that a reason to separate Jewish cultural studies from the fields of Jewish studies and cultural studies is the distinctiveness of Jewish culture among other ethnic experiences. As a diasporic group with religious ties and varying local customs, Jews present difficulties of categorization. He encourages a multiperspectival approach that considers the Jewish double consciousness as being aware of both insider and outsider perspectives, participation in ancient tradition and recent modernization, and the great variety and stigmatization of Jewish experience and cultural expression. Students and scholars in Jewish studies, cultural studies, ethnic-religious studies, folklore, sociology, psychology, and ethnology are the intended audience for this book.

Simon J. Bronner is dean of the College of General Studies and distinguished professor of social sciences at the University of Wisconsin–Milwaukee. He is the author or editor of over forty books, including Jewishness: Expression, Identity, and Representation and The Oxford Handbook of American Folklore and Folklife Studies.

Simon J. Bronner remains the most elegant and insightful commentator on the complex and convoluted world of Jewish (no matter how defined) cultural production. One of the creators of Jewish cultural studies, his work has always been a beacon for all scholars and readers who are trying to frame questions about the Jews and the modern world, no more so in this age of COVID-19, where the Jews seem to be simultaneously perpetual victims as well as perpetrators. An important book for all scholars of ‘out groups,’ including the Jews.

– Sander L. Gilman, author of Stand Up Straight! A History of Posture

In Jewish Cultural Studies, Simon Bronner caps a lifetime of research about Jewish life and lore with an original, provocative cultural perspective that changes the way people think about what Jews do, say, and feel. Breaking new ground for a fertile field of inquiry, it will surely inspire intellectual excitement and provide a basis for the ways that Jews are studied and understood.

– Haya Bar-Itzhak, co-editor of The Power of a Tale: Stories from the Israel Folktale Archives (Wayne State University Press, 2019)

Based on immense scholarship, Jewish Cultural Studies problematizes the categories of ethnic, cultural, and religious, querying boundary maintenance, community construction, and the creation of distinctive Jewish culture and practice. With astute observation, Bronner probes the conceptual and literal, the rhetorical and ethnographic, and the historical and contemporary in this multifaceted exploration of Jewish culture.

It is the capstone of a passionate and sincere pursuit by a major scholar.