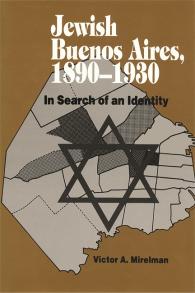 In Search of an Identity

Victor Mirelman, in his study of the greatest concentration of Latin American Jewry, examines the changing facade of the Argentinean Jewish community from the beginning of mass Jewish immigration in 1890 to its decline in 1930. During this period, Jews arrived from Russia, Poland, Romania, Syria, Turkey and Morocco Each group founded its own synagogues. mutual help organizations. hospitals. cultural associations. and newspapers of particular vitality was the Yiddish press and the Yiddish theatre. Jewish immigrants were also especially active politically. particularly in the Socialist Party and in the workers' unions.

Based on research in the Argentine archives. Jewish Buenos Aires, 1890-1930 describes the immigration and settlement process. studies the first generation of Argentine-born Jews. and provides an understanding of assimilation and acculturation. Mirelman discusses the religious life of the community differentiating between the Ashkenazim and the various Sephardic groups and devotes chapters to Zionism, to Jewish culture in Yiddish. Hebrew. and Spanish. to education; and to social action Issues that created conflict and friction are analyzed in detail.

Victor A. Mirelman is visiting professor of Jewish history at the Jewish Theological Seminary. A rabbi, he received his Ph.D. from Columbia University. His articles have appeared in Jewish Social Studies, American Jewish Archives, and Megamot.