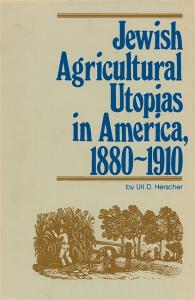 The wealthy, westernized leaders of late nineteenth-century American Jewry and a member of the immigrating Russian Jews shared an eagerness to "repeal" the lengthy socioeconomic history in which European Jews were confined to petty commerce and denied agricultural experience. A small group of immigrant Jews chose to ignore urbanization and industrialization, defy the depression afflicting agriculture in the late 1800s, and devote themselves to experiments in collective farming in America.

Some of these idealists were pious; others were agnostics or atheists. Some had the support of American and West European philanthropists; others were willing to go it alone. But in the farming colonies they founded in Oregon, Colorado, the Dakotas, Michigan, Louisiana, Arkansas, Virginia, and New Jersey, among other places, they were sublimely indifferent to the need for careful planning and thus had limited success. Only in New Jersey, close to markets and supporters in New York and Philadelphia, were colonization efforts combined with agro-industrial enterprises; consequently, these colonies were able to survive for as long as one generation.

Uri D. Herscher is associate professor of American Jewish history and executive vice-president of Hebrew Union College-Jewish Institute of Religion. He holds degrees from the University of California (B.A., 1964) and Hebrew Union College (M.A.H.L., 1970; D.H.L., 1973). Rabbi Herscher is the co-editor, with S. F. Chyet, of On Jews, America, and Immigration: A Socialist Perspective (1980) and author of numerous articles on Jewish history.