Home » Books » The Jew in the American World 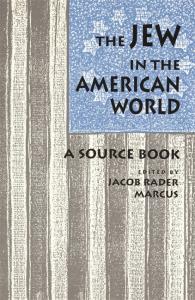 The Jew in the American World

The Jew in the American World is a complete documentary history of the Jewish people in North America from the late sixteenth century to the present. A compilation of previously published archival sources chronicling the evolving domestic, religious, and political experiences of the Jews, this important volume provides the first complete single-volume reference source for American Jewish history.
Once again, Jacob Rader Marcus has created a vivid and insightful portrait of the life and culture of Jews. He has compiled materials—the majority of which were written by Jews culled from diverse sources and ranging in subject from the establishment of the first Jewish day school in the mid-eighteenth century to the plight of Ethiopian Jews in 1991. Many articles highlight the role played by women in the community and the significant contributions made by various Jewish figures. The ideal companion to Marcus's United States Jewry, 1776-1985, The Jew in the American World is an invaluable work, essential for studying and understanding the American Jew.

Jacon Rader Marcus was the founder and director of the American Jewish Archives at the Hebrew Union College/Jewish Institute of Religion in Cincinnati, where he was a member of the faculty for more than seventy years. He authored numerous books on American and European history, including The Jew in the Medieval World, The Colonial American Jew, 1493-1776, and United States of Jewry, 1776-1985.

"The only extant one-volume comprehensive collection of original documents pertaining to Jewish life in the U.S. from colonial times to the present."