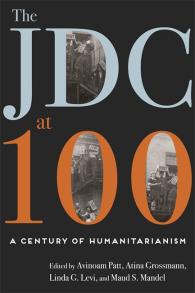 A Century of Humanitarianism

The JDC at 100: A Century of Humanitarianismtraces the history of the JDC—an organization founded to aid victims of World War I that has played a significant role in preserving and sustaining Jewish life across the globe. The thirteen essays in this volume, edited by Avinoam Patt, Atina Grossmann, Linda G. Levi, and Maud S. Mandel, reflect critically on the organization’s transformative impact on Jewish communities throughout the world, covering topics such as aid for refugees from National Socialism in Cuba, Shanghai, Tehran, the Dominican Republic, France, Belgium, and Australia; assistance to Holocaust survivors in Displaced Persons camps for rebuilding and emigration; and assistance in Rome and Vienna to Soviet Jewish transmigrants in the 1970s. Despite the sustained transnational humanitarian work of this pioneering non-governmental organization, scholars have published surprisingly little devoted to the history and remarkable accomplishments of the JDC, nor have they comprehensively explored the JDC’s role on the ground in many regions and cultures. This volume seeks to address those gaps not only by assessing the widespread impact of the JDC but also by showcasing the richness and depth of the JDC Archives as a resource for examining modern Jewish history in global context.

The JDC at 100 is addressed to scholars and students of humanitarian aid, conflict, displacement, and immigration, primarily in Jewish, European, and American history. It will also appeal to readers with a more general interest in Jewish studies and refugee studies, Holocaust museum professionals, and those engaged in Jewish and other relief and resettlement programs.

Avinoam Patt is the Philip D. Feltman Professor of Modern Jewish History at the Maurice Greenberg Center for Judaic Studies at the University of Hartford and co-editor of The New Diaspora: The Changing Landscape of American Jewish Fiction (Wayne State University Press, 2015).

Atina Grossmann is professor of history at Cooper Union in New York. She is co-editor of Shelter from the Holocaust: Rethinking Jewish Survival in the Soviet Union (Wayne State University Press, 2017).

Linda G. Levi is the director of Global Archives at the American Jewish Joint Distribution Committee and editor of I Live. Send Help: 100 Years of Jewish History in Images from the JDC Archives.

Maud S. Mandel is president of Williams College and professor of history in the program in Judaic Studies. She is co-editor of Colonialism and the Jews.

This innovative volume uses the history of the American Jewish Joint Distribution Committee as a window onto the experiences of the Jewish people during the twentieth century. It provides a unique panorama onto far-flung Jewish communities joined together through a remarkable American-based organization with worldwide concerns.

Few organizations have histories as important and powerful as the JDC. Its century of service make it worthy of a book as excellent as this one, which we can hope, will inspire many more scholarly projects. The JDC truly deserves to be the focus of research and attention.

This remarkable collection of scholarly essays, based on the recently opened archives of the JDC, transforms our understanding of American Jewish rescue and humanitarian efforts, emphasizing the interwar and Holocaust years. Heroes, villains, murders, and mysteries fill these pages; so do grim details, poignant photographs, and trenchant analyses. A major contribution to twentieth-century Jewish history.

Based largely on the underutilized archives of the Joint Distribution Committee, these riveting accounts of that century-old institution tell dramatic stories of the rescue and support the JDC has provided to Jews from China to Cuba, Eastern Europe to Israel, and beyond. Firmly committed to avoiding politics, the JDC nevertheless has had to navigate tense, delicate situations and has done so with aplomb, discretion, and remarkable successes.

This volume is of great value for scholars working on a wide variety of projects: on specific topics and communities in which the JDC was involved; comparative studies on the challenges confronting Jews in modern times; the problems facing refugees and emigrants; and the work of global aid organizations. Individuals interested in family histories that intersect with events described
in this volume will find the relevant articles extremely useful, providing the necessary context for their own stories, as well as ample
sources to continue their search.