Home » Books » From Jazz to Swing 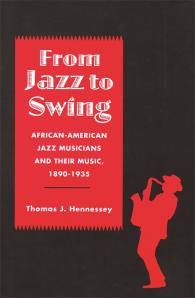 From Jazz to Swing

African-American Jazz Musicians and Their Music, 1890-1935

In the 1920s, many black regional jazz bands were recorded and became products of the entertainment industry, which was altering the face of America from the handmade, homemade, homemade society of the ninteenth century to the mass-produced, mass-consumed technological culture of the twentieth century.

Making use of the files of African American newspapers, such as the Chicago Defender, as well as published and archival oral history interviews, Hennessey explores the contradictions that musicians often faced as African Americans, as trained professional musicians, and as the products of differing regional experiences. From Jazz to Swing follows jazz from its beginnings in the regional black musics of the turn of the century in New Orleans, Chicago, New York, and the territories that make up the rest of the country.

Thomas Hennessey is an associate professor at Fayetteville State University in Fayettevilee, North Carolina. He has published several articles on the history of jazz and has been the host-producer of a weekly jazz radio program for more than a decade.

This book documents the development of jazz in light of the changes within the African American community at the turn of the century. Hennessey offers a thorough look at the historical events which impacted the regional styles of jazz and its legendary figures including James Reese Europe, Duke Ellington, King Oliver, and Louis Armstrong.