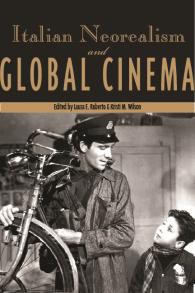 Italian Neorealism in Global Cinema is an original contribution to the humanities, as well as to the narrower field of film studies. I am particularly impressed by the way so many national or regional 'specialists' found common ground in an international and intercultural topic.

Despite its lack of organization and relatively short life span, the Italian neorealist movement deeply influenced directors and film traditions around the world. This collection examines the impact of Italian neorealism beyond the period of 1945–52, the years conventionally connected to the movement, and beyond the postwar Italian film industry where the movement originated.

Providing a refreshing aesthetic and ideological contrast to mainstream Hollywood films, neorealist filmmakers demonstrated not only how an engaging narrative technique could be brought to bear upon social issues but also how cinema could shape and redefine national identity. The fourteen essays in Italian Neorealism and Global Cinema consider films from Italy, India, Brazil, Africa, the Czech Republic, postwar Germany, Hong Kong, the United States, France, Belgium, Colombia, and Great Britain. Each essay explores neorealism’s complex relationship to a different national film tradition, style, or historical period, illustrating the profound impact of neorealism and the ways it continues to complicate the relationship between ideas of nation, national cinema, and national identity. Many of the essays identify similar themes or motifs adapted from neorealism, and several essays address a politicized national film tradition that developed in opposition to a monolithic Western aesthetic.

In all, Italian Neorealism and Global Cinema provides a novel critical understanding of the wide-ranging international impact of a short period in Italian cultural history. Film scholars and students of film history will appreciate this insightful text.

Kristi M. Wilson is a lecturer in the program of writing and rhetoric at Stanford University and director of the Stanford Film Lab.

Italian Neorealism in Global Cinema is an original contribution to the humanities, as well as to the narrower field of film studies. I am particularly impressed by the way so many national or regional 'specialists' found common ground in an international and intercultural topic."

– Peter Lev, professor of electronic media and film at Towson University and author of The Fifties: Transforming the Screen

Scriptwriters, directors, critics, and film scholars around the world are indebted to the remarkable moment that was Italian neorealism. In this valuable book, some of the most astonishing homages to the period are chronicled. As we step back from 6 to 60 years, we find that the past is here in our present, an extraordinary testament to the ongoing influence of leftist realism and everyday life."

– Toby Miller, professor of English, sociology, and women’s studies at University of California, Riverside, and author of Cultural Citizenship: Cosmopolitanism, Consumerism, and Television in a Neoliberal Age

Ruberto and Wilson's volume on the global impact of neorealism is a gift to both novice and scholar. In addition to revealing how ideas of nationhood are inflected from one national cinema to another, the volume refines and expands our understanding of Italian neorealism and of how to approach it critically."