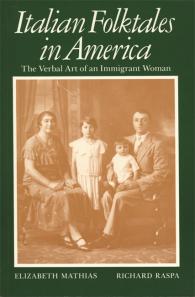 The Verbal Art of an Immigrant Woman

By Elizabeth Mathias and Richard Raspa

The tales are indicative of a great verbal artist…The introductory material is extensive and competent…A rare case study of a folk artist over a long period.

In 1941, while studying folklore at Wayne University with Professor Emelyn Gardner, Bruna Todesco collected from her mother, Clementina, the twenty-two märchen and legends presented in this book. Bruna, her mother, and her father, John, immigrated to America in 1930 from their native village of Faller in the Veneto region of northern Italy.
Not just made up of the recorded texts, this book is also built on the reminiscences of that storyteller and some of her old neighbors in her birthplace, and is a record by two resourceful fieldworkers of what it takes to study memory culture. The result is a work that greatly enriches our understanding of who told (and tells) märchen to whom, why and how they are told, and, perhaps most important, under what conditions.

Elizabeth Mathias is associate professor in the department of sociology and anthropology at St. John’s University, Jamaica, NY. She has studied at the University of Akron (BA, 1962), Kent State University (MA, 1964), and the University of Pennsylvania (MA, 1972; Ph.D., 1974). She has published several articles on various aspects of Italian culture.

Richard Raspa has published two books and numerous articles, primarily in the field of folklore. He received his Ph.D. from the University of Notre Dame in 1971. He is currently associate professor in communications at Wayne State University.

This study is not only an exemplary presentation of folk narrative, but also a sensitive and moving view of the way folklore exists in a real person's life. Mathias and Raspa make Clementina Todesco's narratives available to the rest of us, and, equally and perhaps more important, they help us better understand the nature and character of the immigrant experience in America.

– B. A. Botkin Prize Committee

The tales are indicative of a great verbal artist . . . The introductory material is extensive and competent . . . A rare case study of a folk artist over a long period.