Home » Books » Isaac Leeser and the Making of American Judaism 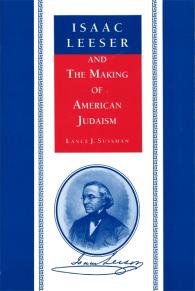 Isaac Leeser and the Making of American Judaism

Sussman's work represents first-rate scholarship and is a most welcome contribution to American Jewish historiography.

More than any other person of his time, Isaac Leeser 0806-1868) envisioned the development of a major center of Jewish culture and religious activity in the United States. He single-handedly provided American Jews with many of the basic religious texts, institutions, and conceptual tools they needed to construct the cultural foundation of what would later emerge as the largest Jewish community in the history of the Jewish people.

Born in Germany, Leeser arrived in the United States in 1824. At that time, the American Jewish community was still a relatively unimportant outpost of Jewish life. No sustained or coordinated effort was being made to protect and expand Jewish political rights in America. The community was small, weak, and seemingly not interested in evolving into a cohesive, dynamic center of Jewish life. Leeser settled in Philadelphia where he sought to unite American Jews and the growing immigrant community under the banner of modern Sephardic Orthodoxy.

Thoroughly Americanized prior to the first period of mass Jewish immigration to the United States between 1830 and 1854, Leeser served as a bridge between the old native-born and new immigrant American Jews. Among the former, he inspired a handful to work for the revitalization of Judaism in America. To the latter, he was a spiritual leader, a champion of tradition, and a guide to life in a new land.

Leeser had a decisive impact on American Judaism during a career that spanned nearly forty years. The outstanding Jewish religious leader in America prior to the Civil War, he shaped both the American Jewish community and American Judaism. He sought to professionalize the American rabbinate, introduced vernacular preaching into the North American synagogue, and produced the first English language translation of the entire Hebrew Bible. As editor and publisher of The Occident, Leeser also laid the groundwork for the now vigorous and thriving American Jewish press.

Leeser's influence extended well beyond the American Jewish community An outspoken advocate of religious liberty, he defended Jewish civil rights, sought to improve Jewish-Christian relations, and was an early advocate of modern Zionism. At the international level, Leeser helped mobilize Jewish opinion during the Damascus Affair and corresponded with a number of important Jewish leaders in Great Britain and western Europe.

In the first biography of Isaac Leeser, Lance Sussman makes extensive use of archival and primary sources to provide a thorough study of a man who has been largely ignored by traditional histories. Isaac Leeser and the Making of American Judaism also tells an important part of the story of Judaism's response to the challenge of political freedom and social acceptance in a new, modern society Judaism itself was transformed as it came to terms with America, and the key figure in this process was Isaac Leeser.

Lance J. Sussman is an associate professor at Binghamton University-State University of New York and a rabbi at Temple Concord, a reform synagogue in Binghamton. A Ph.D. from Hebrew Union College-Jewish Institute of Religion, he is a coeditor of Reform Judaism: A Biographical Dictionary and Sourcebook (Greenwood Press, 1993).

The best, most comprehensive study of arguably the most important American Jewish leader between the late Jacksonian and Antebellum era, this illuminating biography of Isaac Leeser reconstructs his personal struggles, pioneer efforts on behalf of American Judaism, and visions of a viable American-Jewish synthesis. . . Sussman's work represents first-rate scholarship and is a most welcome contribution to American Jewish historiography.