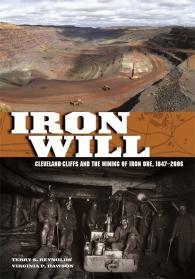 In Iron Will, Virginia P. Dawson and Terry S. Reynolds have written an outstanding example of corporate business history.

In Iron Will: Cleveland-Cliffs and the Mining of Iron Ore, 1847-–2006, Terry S. Reynolds and Virginia P. Dawson tell the story of Cleveland-Cliffs, the only surviving independent American iron mining company, now known as Cliffs Natural Resources. Headquartered in Cleveland, Ohio, Cleveland-Cliffs played a major role in the opening and development of the Lake Superior mining district and Michigan’s Upper Peninsula. Through Cleveland-Cliffs’ history, Reynolds and Dawson examine major transitions in the history of the American iron and steel industry from the perspective of an important raw materials supplier.

Reynolds and Dawson trace Cleveland-Cliffs’ beginnings around 1850, its growth under Samuel L. Mather and his son William G. Mather, its emergence as an important player in the growing national iron ore market, and its tribulations during the Great Depression. The authors explore the company’s fortunes after World War II, when Cleveland-Cliffs developed technologies to tap into vast reserves of low-grade Michigan iron ore and turned to joint ventures and strategic partnerships to raise the capital needed to implement them. The authors also explain how the company became the largest independent producer of iron ore in the United States by purchasing the mining interests of its bankrupt partners during the implosion of the American steel industry in the late-twentieth and early twenty-first centuries. Reynolds and Dawson detail Cleveland-Cliffs’ evolving efforts to deal with labor, from its early mostly immigrant workforce to its ambitious program of welfare capitalism in the early twentieth century to its struggles with organized labor after World War II.

Iron Will is a thorough, well-organized history based on extensive archival research and interviews with company personnel. This story will appeal to scholars interested in industrial or mining history, business historians, and those interested in Great Lakes and Michigan history.

Terry S. Reynolds is professor of history at Michigan Technological University. He has authored or edited several books including Stronger than a Hundred Men: A History of the Vertical Water Wheel and The American Engineer.

Virginia P. Dawson is president of History Enterprises, Inc. She is the author of several institutional histories, including Engines and Innovation: Lewis Laboratory and American Propulsion Technology, Lincoln Electric, A History, and co-author of With One Voice: The Association of American Medical Colleges, 1876–2002.

In Iron Will, Terry S. Reynolds and Virginia P. Dawson have written an outstanding example of corporate business history. The authors immersed themselves in the breadth and depth of an extraordinary volume of primary sources; interviews with corporate executives are particularly valuable."

– David A. Walker, professor of history at the University of Northern Iowa

Iron Will makes several important contributions to the historical literature of the iron and steel industry, mining, and the Lake Superior region. The book greatly enriches the history of iron ore mining, a topic that has been neglected by historians for many decades.

– Jeffrey T. Manuel, IA: The Journal of the Society of Industrial Archaeology

Iron Will is a major contribution to the literature on Lake Superior metal-mining and the best new book on the Marquette iron range in many decades. While weaving together labor, business, and technological history, Iron Will details how Cleveland-Cliffs has survived over 160 years by adapting to changing and challenging economic conditions."

Coverage is wide ranging and creative, making Iron Will a model business history. Moreover, this study fills
a void in the literature of the history of American mining. The numerous illustrations, imaginatively selected, add to the value of the work and they are appropriately captioned and placed. Finally, a sensible bibliography and a useable index complement the book.

Cleveland-Cliffs (now Cliffs Natural Resources) is an amazing story and while the history of the company wasn’t always pretty, the authors fact-based text material present the good as well as the not-so-good. . . .This volume is corporate history at its best and was both an informative and interesting read.

1 day 3 hours ago
Happy Pub Date to THE SPOOK WHO SAT BY THE DOOR, SECOND EDITION! This new edition of a literary classic now includ… https://t.co/XrCsLZvf4D
1 day 3 hours ago
RT @DarkProjections: Returned from a great two weeks in Europe to find copies of my new book! Kolchak:The Night Stalker, one of the Pion… https://t.co/kPJ5kKLRyr
2 days 43 min ago
RT @oneitadetroit: Thrilled that @WSUPress is releasing the 2E of Sam Greenlee's "The Spook Who Sat by the Door" tomorrow. Introductio… https://t.co/hZpAjxluIl