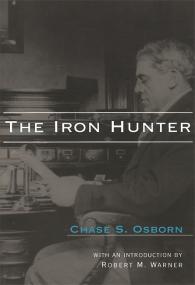 Chase S. Osborn
With an Introduction by Robert M. Warner

Originally published in 1919, The Iron Hunter is the autobiography of one of Michigan's most influential and flamboyant historical figures: the reporter, publisher, explorer, politician, and twenty-seventh governor of Michigan, Chase Salmon Osborn (1860-1949). Making unprecedented use of the automobile in his 1910 campaign, Osborn ran a memorable campaign that was followed by an even more remarkable term as governor. In two years he eliminated Michigan's deficit, ended corruption, and produced the state's first workmen's compensation law and a reform of the electoral process. His autobiography reflects the energy and enthusiasm of a reformer inspired by the Progressive Movement, but it also reveals the poetic spirit of an adventurer who fell in love with Michigan's Upper Peninsula after traveling the world.

Robert Warner was a historian, dean, and professor emeritus at the University of Michigan. He was the author of Diary of a Dream, a history of the creation of the independent National Archives and Records Administration (NARA).