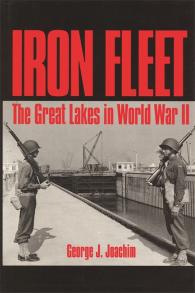 Iron Fleet focuses on the vital role played by the Great Lakes shipping industry during World War II. George J. Joachim examines how the industry met the unprecedented demand for the shipment of raw materials to meet production quotas during the war, when failure to do so would have had disastrous consequences for the nation's defense effort. Steel production was crucial to the American war effort, and the bulk shippers of the lakes supplied virtually all of the iron ore necessary to produce the steel. The war material forged in the "arsenal of democracy" equipped not only fifteen million Americans mustered into the armed forces, but the forces of the nation's allies as well.

Based mainly on original research from primary sources, Iron Fleet also explores the use of Great Lakes shipyards for the production of salt water civilian and military vessels, the role of the Great Lakes passenger ships in providing vacation opportunities for war workers, and the extensive measures taken to to safeguard the Soo Locks and other potential targets from sabotage.

An attorney in private practice in Algonac, Michigan, George J. Joachim earned his J.D. from the Detroit College of Law and his M.A. in American History from Oakland University. His lifelong interest in the Great Lakes shipping industry began in his youth when he spent time watching the freighters pas on the St. Clair River.