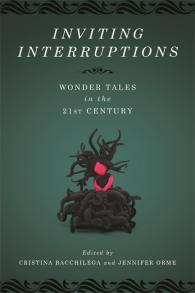 Wonder Tales in the Twenty-First Century

Inviting Interruptions: Wonder Tales in the Twenty-First Century anthologizes contemporary stories, comics, and visual texts that intervene in a range of ways to challenge the popular perception of fairy tales as narratives offering heteronormative happy endings that support status-quo values. The materials collected in Inviting Interruptions address the many ways intersectional issues play out in terms of identity markers, such as race, ethnicity, class, and disability, and the forces that affect identity, such as non-normative sexualities, addiction, abuses of power, and forms of internalized self-hatred caused by any number of external pressures. But we also find celebration, whimsy, and beauty in these same texts—qualities intended to extend readers’ enjoyment of and pleasure in the genre.

Edited by Cristina Bacchilega and Jennifer Orme, the book is organized in two sections. "Inviting Interruptions" considers the invitation as an offer that must be accepted in order to participate, whether for good or ill. This section includes Emma Donoghue’s literary retelling of "Hansel and Gretel," stills from David Kaplan’s short Little Red Riding Hood film, Bryan Kamaoli Kuwada’s story about stories rooted in Hawaiian tradition and land, and Shary Boyle, Shaun Tan, and Dan Taulapapa McMullin’s interruptions of mainstream images of beauty-webs, commerce, and Natives. "Interrupting Invitations" contemplates the interruption as a survival mechanism to end a problem that has already been going on too long. This section includes reflections on migration and sexuality by Diriye Osman, Sofia Samatar, and Nalo Hopkinson; and invitations to rethink human and non-human relations in works by Anne Kamiya, Rosario Ferré, Veronica Schanoes, and Susanna Clark.

Each text in the book is accompanied by an editors’ note, which offers questions, critical resources, and other links for expanding the appreciation and resonance of the text. As we make our way deeper into the twenty-first century, wonder tales—and their critical analyses—will continue to interest and enchant general audiences, students, and scholars.

Jennifer Orme is a narrative designer, writer, professor, and editor in Toronto, Canada. In addition to her fictional work as the former Fabulist for The Mysterious Package Company, and the creator of the world of The Boundless Library, she has published in New Approaches to Teaching Folk and Fairy Tales.

Cristina Bacchilega is professor of English at the University of Hawai‘i-Manoa, where she teaches fairy tales and their adaptations, folklore and literature, and cultural studies. With Marie Alohalani Brown, she co-edited the Penguin Book of Mermaids, and with Anne Duggan, she co-edits Marvels & Tales: Journal of Fairy-Tale Studies.

Inviting Interruptions is a treasure trove for all who like to think with and about fairy tales. Its unique combination of texts and visuals celebrates the richness of fairy-tale material today. The editors’ notes open the conversation on potential meanings for each contribution, making this collection indispensable for courses in fairy-tale studies that want to keep up with this genre’s latest developments.

Inviting Interruptions is a major contribution to the field: an anthology of contemporary fairy tales that seeks to match and continue—in ambition, liveliness, and ideological orientation—the promise of the great renaissance of fairy tales of the 1970s and 1980s. Matching that promise involves recognizing and responding to changes in our political climate, as well as to changes in our attitude to the very idea of a climate. Inviting Interruptions does so inspiringly. There simply isn’t a volume of this kind currently on the market.

Inviting Interruptions is, indeed, an amazing collection of expressionist fairy tales that reflect the troublesome times in which we live. The editors of this remarkable anthology, Cristina Bacchilega and Jennifer Orme, have carefully gathered narratives, artworks, graphic stories, and photos that will cause readers to pause in astonishment. Due to the explosion of ‘wonder’ tales in the twenty-first century, they could have added several hundred more. As it is, their selection—bringing together Shaun Tan, Kelly Link, Rosario Ferré, David Kaplan, and Joellyn Rock among the talented writers and artists—is a significant achievement. This is a book to read and ponder in the chaotic years to come.

In a fairy-tale world wherein the best prevail (which doesn’t include every fairy tale!) this truly innovative anthology would replace all others. Where most books of wonder tales focus on literary versions, using visuals primarily as illustration, Inviting Interruptions fully engages with photography, graphic novel, sculpture, film, painting, drawing, and multimedia visual art as much as with the written word. Bacchilega and Orme offer verbal-text-driven fairy-tale studies an entirely engaging disturbance.

With this original and hybrid collection of wonder tales, Bacchilega and Orme extend to us an invitation to wander – and get temporarily lost – in the woods of contemporary folklore and fairy tales. [. . .] Indeed, only by inviting ourselves into these tales and accepting to interrupt and modify them can we, in turn, hope to recognize and reclaim our own of sense of otherness and wonder.

The stories and artworks in this book both invite and interrupt; not a single text is ho-hum, delivering a staid happily-ever-after. These are beautiful pieces that promise to reward curiosity, though with pleasure or pain depends on the text and on the reader, and the editors have framed the pieces with exquisite care and attention to detail. My only complaint is that I wanted more by the time I had finished the book.

The tales themselves are generally engaging and of high quality, and the notes are eclectic in their theoretical approaches.... Many of the tales could be used profitably in undergraduate courses on fairy tales, especially to bring in new perspectives not likely explored by nonspecialists.