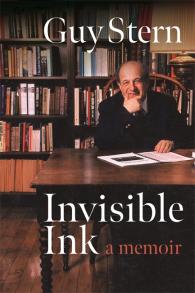 A Memoir by Guy Stern

Invisible Ink is the story of Guy Stern’s remarkable life. This is not a Holocaust memoir; however, Stern makes it clear that the horrors of the Holocaust and his remarkable escape from Nazi Germany created the central driving force for the rest of his life. Stern gives much credit to his father’s profound cautionary words, "You have to be like invisible ink. You will leave traces of your existence when, in better times, we can emerge again and show ourselves as the individuals we are." Stern carried these words and their psychological impact for much of his life, shaping himself around them, until his emergence as someone who would be visible to thousands over the years.

This book is divided into thirteen chapters, each marking a pivotal moment in Stern’s life. His story begins with Stern’s parents—"the two met, or else this chronicle would not have seen the light of day (nor me, for that matter)." Then, in 1933, the Nazis come to power, ushering in a fiery and destructive timeline that Stern recollects by exact dates and calls "the end of [his] childhood and adolescence." Through a series of fortunate occurrences, Stern immigrated to the United States at the tender age of fifteen. While attending St. Louis University, Stern was drafted into the U.S. Army and soon found himself selected, along with other German-speaking immigrants, for a special military intelligence unit that would come to be known as the Ritchie Boys (named so because their training took place at Ft. Ritchie, MD). Their primary job was to interrogate Nazi prisoners, often on the front lines. Although his family did not survive the war (the details of which the reader is spared), Stern did. He has gone on to have a long and illustrious career as a scholar, author, husband and father, mentor, decorated veteran, and friend.

Invisible Ink is a story that will have a lasting impact. If one can name a singular characteristic that gives Stern strength time after time, it is his resolute determination to persevere. To that end Stern’s memoir provides hope, strength, and graciousness in times of uncertainty.

Guy Stern is Distinguished Professor Emeritus in the Department of Classical and Modern Languages, Literatures, and Cultures at Wayne State University. He is currently director of the Harry and Wanda Zekelman International Institute of the Righteous at the Holocaust Memorial Center Zekelman Family Campus. He is the author of War, Weimar, and Literature: The Story of the Neue Merkur, Literature and Culture in Exile, and numerous scholarly papers.

Interspersing intellectual brilliance with deep emotional intelligence, Invisible Ink is a smart and compassionate memoir about a life well lived. It is steeped in historical significance and emphasizes getting the most out of every moment.

It is an admirable and enviable achievement when a scholar who near the century mark writes a book that compares favorably with the one he wrote in the folly of his youth more than a half century ago or even in the years of his wisdom a quarter century ago or the years of his strength when he was four score. Guy Stern’s Invisible Ink is a charming work depicting his long and eventful life; his youth in pre-Nazi Germany, his escape to the United States, the lone survivor of his family, his acculturation into his adopted country, his army career, a Ritchie Boy who interrogated his enemies and his post-war life – education, marriage, family, academic achievement. Stern writes with insight and wit. One can only marvel at his recollection of details, his powerful understanding of academia and exile and his encounters with the grandchildren and great-grandchildren of those who shattered his world, destroyed his community, murdered his family and sent him into exile. As I read this book, I found myself in tears and in laughter, with ever intensifying respect and gratitude for the life Guy Stern has led, a life of achievement and accomplishment, of purpose and of passion. Unlike the title of his book, Stern’s life has been has been most visible and even more valuable.

Readers should be prepared to be wrapped in and mesmerized by the eloquence and emotion of Guy Stern’s words. Be amazed, too, by a life well-lived, touching and affecting many by example but most often, more closely. Compassion, patience, and courage now seem to mean much more. A must-read for all who treasure life and living.

Guy Stern’s story is an uncommon one told with horripilating effect. This book is a must-read in these changing times.

Reading Invisible Ink reminds me of the Ogden Nash lyric, ‘Boy, what memoirs them was!’ Guy Stern is a survivor, soldier, hero, scholar, professor, and provost, but first and always, a ‘mensch.’ For forty years, he has been my wise counselor, gilded-tongued ambassador, and inspiration.

Moving and unforgettable. Guy Stern’s telling of his epic journey through a well-lived life serves as a monument to the triumph of the human spirit.

Stern has artfully captured all that it takes to build the soldier destined to conduct some of the more interesting missions of World War II. Beyond that, he weaves the gripping, yet delightful, story of his transition from immigrant to student to interrogator to scholar in what is a remarkable read for all of us. It is a treasure trove of experiences, insights, and lessons from a life well-lived which will benefit readers of all ages, all interests, and all passions.

An inherently fascinating and memorable read from beginning to end, Invisible Ink will prove to be an enduringly appreciated and prized addition to both community and academic libraries.

Stern is an elegant writer [. . .] interesting memoir of an accomplished life well lived.

2 days 42 min ago
Now a National Jewish Book Award Finalist! @JewishBook https://t.co/qTKAeUEPVX
2 days 4 hours ago
RT @Steph_Steinberg: Tomorrow @ 7 p.m.! Join me and @DETWritingRoom at The Whitney for our first #2023AuthorSeries event ft. @waynestate… https://t.co/pssbi2NLNs
6 days 5 hours ago
SAVE THE DATE! Join author Desiree Cooper and illustrator Bec Sloane this Saturday for a behind the scenes look at… https://t.co/cKDBmbewOa