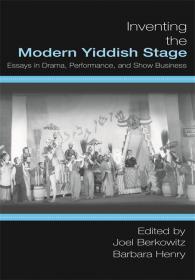 Both scholarly and entertaining, Inventing the Modern Yiddish Stage is a collection of essays whose variety not only makes the volume fun for browsing but also expands understanding of the history and nature of Yiddish theater

While Yiddish theater is best known as popular entertainment, it has been shaped by its creators’ responses to changing social and political conditions. Inventing the Modern Yiddish Stage: Essays in Drama, Performance, and Show Business showcases the diversity of modern Yiddish theater by focusing on the relentless and far-ranging capacity of its performers, producers, critics, and audiences for self-invention. Editors Joel Berkowitz and Barbara Henry have assembled essays from leading scholars that trace the roots of modern Yiddish drama and performance in nineteenth-century Eastern Europe and span a century and a half and three continents, beyond the heyday of a Yiddish stage that was nearly eradicated by the Holocaust, to its post-war life in Western Europe and Israel.

Each chapter takes its own distinct approach to its subject and is accompanied by an appendix consisting of primary material, much of it available in English translation for the first time, to enrich readers’ appreciation of the issues explored and also to serve as supplementary classroom texts. Chapters explore Yiddish theater across a broad geographical span—from Poland and Russia to France, the United States, Argentina, and Israel and Palestine. Readers will spend time with notable individuals and troupes; meet creators, critics, and audiences; sample different dramatic genres; and learn about issues that preoccupied both artists and audiences. The final section presents an extensive bibliography of book-length works and scholarly articles on Yiddish drama and theater, the most comprehensive resource of its kind.

Collectively these essays illuminate the modern Yiddish stage as a phenomenon that was constantly reinventing itself and simultaneously examining and questioning that very process. Scholars of Jewish performance and those interested in theater history will appreciate this wide-ranging volume.

Joel Berkowitz is the director of the Sam and Helen Stahl Center for Jewish Studies and a professor in the Department of Foreign Languages and Literature at the University of Wisconsin–Milwaukee. He is the author of Shakespeare on the American Yiddish Stage, editor of Yiddish Theatre: New Approaches, and co-editor of Landmark Yiddish Plays: A Critical Anthology.

This is a remarkable collection of essays on a subject that has received scant attention for the better part of a century. Here is Yiddish theater in all its diversity, from its origins to its peak, shund and art, from Europe to the Americas and Israel, its history told by its established and emerging scholars. This is a major contribution to a field that is finally, and thankfully, coming into its own.

A significant resource for scholars interested in the history of Yiddish theatre. The editors and contributors have significant standing within the field and the essays are thoroughly researched and informative."

– Henry Bial, associate professor of theatre and film at the University of Kansas

Both scholarly and entertaining, Inventing the Modern Yiddish Stage is a collection of essays whose variety not only makes the volume fun for browsing but also expands understanding of the history and nature of Yiddish theater. Here's a small sampling of the thirteen chapters, each of which is a genuine contribution to the field: how the repertory of a single art theater in Warsaw in the 1920s explored the controversial definition of 'Jewish' art; how 'youth gangs' on the Lower East Side defended the honor of matinee idols; how a Russian revolutionary who called himself 'Ivan' turned from reforming czarist society to reforming Yiddish literary drama; how the witty lyrics of an Argentinean singer-songwriter amused cabaret audiences in a mixture of Spanish and Yiddish; how twentieth-century revivals of a popular nineteenth-century operetta revealed Israeli attitudes to diaspora culture. All the authors provide impressively thorough notes and bibliographies, as well as useful appendices. An intelligent introduction by the editors, elucidating both history and historiography, puts all the essays into context.