Home » Books » Inside a Gestapo Prison 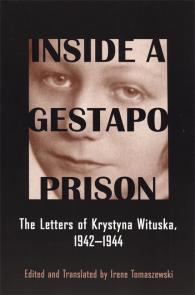 Inside a Gestapo Prison

Edited and Translated by Irene Tomaszewski

Beautifully translated and edited by Irene Tomaszewski, Krystyna's account of the joy and pleasure she finds in life while awaiting execution in a Berlin prison — close friendships with her cellmates, a glimpse of a blossoming tree outside, the kindness and courage of a German prison matron — is inspiring and almost unbearably poignant.

On the eve of World War II, Krystyna Wituska, a carefree teenager attending finishing school in Switzerland, returned to Poland. During the occupation, when she was twenty years old, she drifted into the Polish Underground. By her own admission, she was attracted first by the adventure, but her youthful bravado soon turned into a mental and spiritual mastery over fear. Because Krystyna spoke fluent German, she was assigned to collect information on German troop movements at Warsaw's airport.

In 1942, at age twenty-one, she was arrested by the Gestapo and transferred to prison in Berlin, where she was executed two years later.

Eighty of the letters that Krystyna wrote in the last eighteen months of her life are translated and collected in this volume. The letters, together with an introduction providing historical background to Krystyna's arrest, constitute a little-known and authentic record of the treatment of ethnic Poles under German occupation, the experience of Polish prisoners in German custody, and a glimpse into the prisons of Berlin. Krystyna's letters also reflect her own courage, idealism, faith, and sense of humor. As a classroom text, this book relates nicely to contemporary discussions of racism, nationalism, patriotism, human rights, and stereotypes.

Irene Tomaszewski is a writer and translator living in Montreal, Canada, who was born in a Soviet concentration camp. She is co-author of Zegota: The rescue of Jews in wartime Poland (Price-Patterson, 1994).

During World War II, twenty-year-old Krystyna Wituska joined the Polish Underground movement. She was subsequently caught by the German Gestapo and executed. This book comprises the letters that she wrote while in prison. Combining humor, irony, tenderness, shrewd observation, and inevitable poignancy, they constitute a remarkable tribute to the indomitability of the human spirit. Bereft of 'so much of the world's beauty,' the poet in Wituska feels that the transient touch of sunshine on her cheek 'is better than a kiss.' The book is admirably translated into English, and sensitively edited, by Irene Tomaszewski (who herself was born in a Soviet concentration camp)."

This deeply moving collection of letters written by a young Polish woman condemned to death for her participation in the struggle against Nazi barbarism is a remarkable testimony to the resilience of the human spirit. It will bring to a wider public the best values of the wartime Polish resistance."

Like the diary of Anne Frank, the prison letters of the young Polish resistance fighter, Krystyna Wituska, are an eloquent, moving testament to the indestructibility of the human spirit in the face of total evil. Beautifully translated and edited by Irene Tomaszewski, Krystyna's account of the joy and pleasure she finds in life while awaiting execution in a Berlin prison-close friendships with her cellmates, a glimpse of a blossoming tree outside, the kindness and courage of a German prison matron-is inspiring and almost unbearably poignant."

– Lynne Olson and Stanley Cloud, co-authors of A Question of Honor: The Kosckuszko Squadron: Forgotten Heroes of World War II and The Murrow Boys