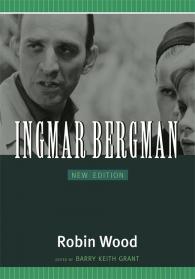 Wood’s voice is unmistakably his own. His deep knowledge of Bergman’s films and his unerring sense of their place in a larger cultural conversation imparts an enviable authority.

At a time when few reviewers and critics were taking the study of film seriously, Robin Wood released a careful and thoroughly cinematic commentary on Ingmar Bergman's films that demonstrated the potential of film analysis in a nascent scholarly field. The original Ingmar Bergman influenced a generation of film scholars and cineastes after its publication in 1969 and remains one of the most important volumes on the director. This new edition of Ingmar Bergman, edited by film scholar Barry Keith Grant, contains all of Wood's original text plus four later pieces on the director by Wood that were intended for a new volume that was not completed before Wood's death in 2010.

In analyzing a selection of Bergman's films, Wood makes a compelling case for the logic of the filmmaker's development while still respecting and indicating the distinctiveness of his individual films. Wood's emphasis on questions of value (What makes a work important? How does it address our lives?) informed his entire career and serve as the basis for many of these chapters. In the added material for this new edition, Wood considers three important films Bergman made after the book was first published-Cries and Whispers, Fanny and Alexander, and From the Life of the Marionettes-and also includes significant reassessment of Persona. These pieces provocatively suggest the more political directions Wood might have taken had he been able to produce Ingmar Bergman Revisited, as he had planned to do before his death.

In its day, Ingmar Bergman was one of the most important volumes on the Swedish director published in English, and it remains compelling today despite the multitude of books to appear on the director since. Film scholars and fans of Bergman's work will enjoy this updated volume.

Barry Keith Grant is a professor in the Department of Communications, Popular Culture, and Film at Brock University in Ontario, Canada. He is the author or editor of many books, including Shadows of Doubt: Negotiations of Masculinity in American Genre Films (Wayne State University Press, 2011) and Documenting the Documentary: Close Readings of Documentary Film and Video (Wayne State University Press, 1998) and has served as editor-in-chief of the four-volume Schirmer Encyclopedia of Film.

Wood's voice is unmistakably his own. His deep knowledge of Bergman's films and his unerring sense of their place in a larger cultural conversation imparts an enviable authority.

More than an astute critic's progressive engagement with a brilliant artist, this volume emblematizes the shifting values in film analysis. So much livelier than any memorial, this new edition is invaluable.

7 min 43 sec ago
TONIGHT! Join @stephanie_heit at @ShopBooksweet for local author's night! https://t.co/pTny5OErDe
21 hours 51 min ago
Have you had a chance to check out our new Spring & Summer 2023 Catalog?! From a new lyric essay collection to a p… https://t.co/cNAo9WjL9K
1 day 20 hours ago
RT @shondabuchanan: Tonight! Feb. 1, 2023, 6:30pm Mountain Time -- Virtual reading for #lewisandclarklibrary Lewis & Clark Library in H… https://t.co/UAmMoIlq1w