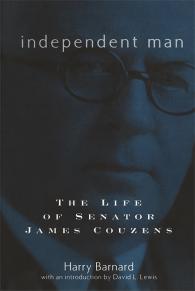 The Life of Senator James Couzens

Harry Barnard
With an Introduction by David L. Lewis

Couzens was one of the greatest and most powerful men ever to sit in the Senate of the United States… There is a warm sense of satisfaction given to the reader of this book. It renews his faith in man…

First published in 1958 by Charles Scribner’s Sons, Independent Man is the only book-length biography of one of Michigan’s most remarkable men. His many careers embraced both the business and political spheres.

Couzens was a prominent businessman who helped shape Ford Motor Company, but he left the company when he and Henry Ford clashed over politics. Upon leaving Ford, Couzens began his political career, first serving as Detroit’s police commissioner. He went on to a controversial term as mayor of Detroit and then represented Michigan in the U.S. Senate. This book reveals the life of a truly unique and inspirational man.

David L. Lewis was professor emeritus of business history at University of Michigan. He is author of The Public Image of Henry Ford: An American Folk Hero and His Company.