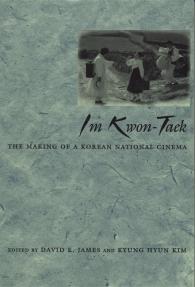 The Making of a Korean National Cinema

Im Know-Taek: The making of a Korean National Cinema is a very welcome addition to the volume of studies on Korean film in general.

Korean cinema was virtually unavailable to the West during the Japanese colonial period (1910-1945), and no film made before 1943 has been recovered even though Korea had an active film-making industry that produced at least 240 films. For a period of forty years, after Korea was liberated from colonialism, a time where Western imports were scarce, Korean cinema became an innovative force reflecting a society whose social and cultural norms were becoming less conservative. Im Kwon-Taek: The Making of a Korean National Cinema is a colleciton of essays written about Im Kwon-Taek, better know as the father of New Korean Cinema, that takes a critical look at the situations of filmmakers in South Korea.

Written by leading Koreanists and scholars of Korean film in the United States, Im Kwon-Taek is the first scholarly treatment of Korean cinema. It establishes Im Kwon-Taek as the only major Korean director whose life’s work covers the entire history of South Korea’s military rule (1961-1992). It demonstrates Im’s struggles with Korean cinema’s historical contradictions and also shows how Im rose above political discord. The book includes an interview with Im, a chronology of Korean cinema and Korean history showing major dynastic periods and historical and political events, and a complete filmography.

Im Kwon-Taek is timely and makes a significant contribution to our understanding of Korean cinema. These essays situate Im Kwon-Taek within Korean filmmaking, placing him in industrial, creative, and social contexts, and closely examine some of his finest films. Im Kwon-Taek will interest students and scholars of film studies, Korean studies, religious studies, postcolonial studies, and Asian studies.

David James is a professor of cinema studies at the University of Southern California. He is the author of Allegories of Cinema: American Film in the Sixties (Princeton University Press, 1989) and Power Misses: Essays Across (Un) Popular Culture (Verso Books, 1996).

Kyung Hyun Kim is a professor of East Asian studies at the University of California at Irvine.

What sets this work apart from other books on Korean Film that have recently come out in the Western languages in the fact that it explores the work of Korea's foremost director, Im Kwon-Taek, head-on, without first trying to explain every single detail about Korean culture. It looks into the ideas on the director's unique position in Korean cinema. Im Know-Taek: The making of a Korean National Cinema is a very welcome addition to the volume of studies on Korean film in general. I am convinced, therefore, that it will prove to be a great resource to those involved in world cinema or Korean culture studies.