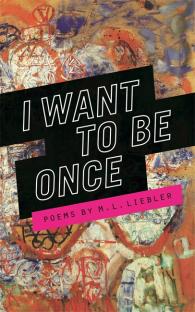 I Want to Be Once

In I Want to Be Once, M. L. Liebler approaches current events with a journalistic eye and a poet's response. Part autobiographical, part commentary, the lines of Liebler's poems come hard-hitting, but not without moments of great tenderness and humanity.

Ordered into three sections, I Want To Be Once provides readers with a look into the author's personal life, as well as our collective history as a nation vis-a-vis the American media. The first section, called "American Life," captures the experience of coming of age in working-class 1960s America and helps to paint the picture of Liebler's early political involvement. The poems in the second section, "American War," focus on the author's cultural work in Afghanistan for the U.S. State Department; Liebler successfully captures the sad realities and fleeting stability of everyday life in Kabul, Jalalabad, and Kandahar. In the final section, "American Psalms," the short, satirical poems muse on present-day American society, culture, and the arts. In these poems, Liebler remarks on everything from public education to public radio to Russia's feminist punk rock protest group Pussy Riot and more.

The poems in I Want to Be Once are emotionally grounding but punctuated with a humor that keeps things in perspective. Readers with an interest in poetry and social commentary will be drawn to this engaging collection.

You are hereby warned to take the cover of this book, open it, and hold on. This collection of poems is full of lavish disrespect at a time when wealth has never been more respected. Liebler’s new poems are brilliant, magnificent, and transcending.

I Want to Be Once has the heart of a sage bringing wisdom to those without experience. While I may be stuck behind my computer, living a life of privilege and low conceit, seeking out only those things pertinent to me, Liebler delivers the news of reality and a slant to go along with it. The revolution is in the letter.

The poems in I Want to Be Once are vibrant with M. L. Liebler's attempt to tie together all the threads of his Detroit factory grandparents, his fishing in Michigan rivers and Cass Corridor Arts memories, his adoration of languages fueled by travel, and in fact the politics of everyday life from which his vision of himself is made. These poems are honestly American and entirely without guile–rare, simple, truthful.

M. L. Liebler is the poet laureate of America’s working class. The collection he has assembled rings out with truth, intensity and love. In a world full of despair, it is comforting to have writers so gifted and generous singing our song of rebellion and hope. This book is the kind of spark we need these days—a rich, intense, and inspiring collection.

From the factories of Detroit to the deserts of Kandahar to the streets of Liverpool, M.L. Liebler brings a true voice of the American 60s—still pure with peace and love, still speaking in the lexicon of spirit and soul. And sure, Liebler takes us into the dark: Last night/I was awake/Counting fish/Inside my blood. He knows the private and public war, he wants to redesign America. In this book, he proves the existence of God: Watermelon,/ Beatles,/And the Infield Fly Rule. Liebler is the real thing—buy this book!

– Jan Beatty, author of The Switching/Yard

In the growing M. L. Liebler world—peace, gentleness, self-understanding, all alight alongside the angry bull’s-eye lances he throws. Beautiful!

These poems have tenderness, grief, loss, love, memory, history. They have workers' struggles and the hint and hope of revolution around the bend. The poet goes to war in these poems, and the poet claims the radiance that shines ‘underneath/the shadow,’ a radiance that ‘dances right through sorrow.’ Read these poems and find that radiance yourself.

M. L. Liebler is a fine poet. I know that his work, related to that of the U.S. greats and the less classic but highly idiosyncratic British poets, is very much his own. It simultaneously celebrates Liverpool and mourns for lost America and Americans. His poems always communicate, never intellectualize, and are not afraid of sentiment. M. L.’s compassion for this world ranges from Detroit to Afghanistan, and it clearly stems from his nurturing working-class roots. His combination of the normal and the extraordinary never fails to hit the spot. He is a genuine human being and poet.

We're shown a man who is the product of working-class 1960s America and who would go on to work in Afghanistan for the U.S. State Department. A humorous and emotionally honest book.

. . . Liebler is the bard of Detroit, an indefatigable champion of the city's literary scene and a longtime and beloved teacher at Wayne State University.

The city’s poet laureate is having a banner publishing year, with three books he has produced or edited hitting the market in 2016.

I don't know if ML was born on the 4th of July, but he certainly could have been; he and his poems are as American as his beloved Motor City [. . .] And he and his fine poems should be celebrated more widely. From Detroit to Oakland to The Bronx, and many spirit-thirsty places in between.

I don't know if ML was born on the 4th of July, but he certainly could have been; he and his poems are as American as his beloved Motor City [. . .] And he and his fine poems should be celebrated more widely. From Detroit to Oakland to The Bronx, and many spirit-thirsty places in between.

M. L. Liebler on "Detroit Today with Stephen Henderson" from WDET, recorded May 13, 2016