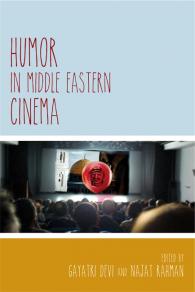 While Middle Eastern culture does not tend to be associated with laughter and levity in the global imagination, humor—often satirical—has long been a staple of mainstream Arabic film. In Humor in Middle Eastern Cinema, editors Gayatri Devi and Najat Rahman shed light on this tradition, as well as humor and laughter motivated by other intent—including parody, irony, the absurd, burlesque, and dark comedy. Contributors trace the proliferation of humor in contemporary Middle Eastern cinema in the works of individual directors and from the perspectives of genre, national cinemas, and diasporic cinema.

Humor in Middle Eastern Cinema explores what humor theorists have identified as an "emancipatory," "liberatory," even "revolutionary" function to humor. Among the questions contributors ask are: How does Middle Eastern cinema and media highlight the stakes and place of humor in art and in life? What is its relation to the political? Can humor in cinematic art be emancipatory? What are its limits for its intervention or transformation? Contributors examine the region’s masterful auteurs, such as Abbas Kiarostami, Youssef Chahine, and Elia Suleiman and cover a range of cinematic settings, including Egypt, Iran, Israel, Lebanon, Palestine, Syria, Tunisia, and Turkey. They also trace diasporic issues in the distinctive cinema of India and Pakistan.

This insightful collection will introduce readers to a variety of contemporary Middle Eastern cinema that has attracted little critical notice. Scholars of cinema and media studies as well as Middle Eastern cultural history will appreciate this introduction to a complex and fascinating cinema.

Najat Rahman is associate professor of comparative literature at the University of Montreal. She is author of Literary Disinheritance: The Writing of Home in the Work of Mahmoud Darwish and Assia Djebar. She is co-editor of Mahmoud Darwish, Exile’s Poet: Critical Essays.

I can’t say enough about this splendid anthology, whose uniformity of excellence among the essays and range of cinemas and films discussed will greatly add to the cinematic canon and be the first place to turn in any future works on the cinemas of this region.

– David Desser, emeritus professor of cinema studies at the University of Illinois at Urbana–Champaign

If you have been paying attention to the news from the Middle East for the past several decades, you probably haven’t thought much about humor as an attribute of this region, which has been wracked by uprisings, rebellions, revolutions, crack-downs, occupations, ethnic and religious cleansings, and imperialist wars. However, the editors of Humor in Middle Eastern Cinema have successfully put together a thoughtful anthology that clearly makes that association.

Readers may be surprised to learn how important humor is to the cultures of the Middle East. Gayatri Devi and Najat Rahman have put together a collection of essays that demonstrate it, making a popular film tradition visible to us and showing at the same time why sometimes we need to take humor seriously. The essays of Humor in Middle Eastern Cinema chart a path through a neglected subject.

The essays in the volume trace humor from Plato and Aristotle to Kant, Santayana, and Freud. As Rahman notes, politics may be predominant, but cinema shows "art as life." . . . This is a groundbreaking study for those serious about film.

Film students will benefit from the academic rigor and thoroughness of these informed essays. Film buffs will enjoy the validation of comedy as a vital social critique and the exposure to films which might have escaped their notice before reading Humor in Middle Eastern Cinema.