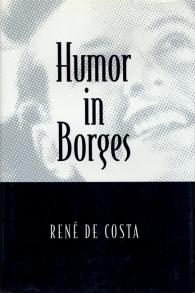 Both delightful and informative, this book will be a pleasure to all those who have found themselves wandering, amazed, in the labyrinth of Borges' fiction.

— British Bulletin of Publications on Latin America, the Caribbean, Portugal, and Spain

Jorge Luis Borges (1899-1986), an Argentine writer of serious avant-garde poetry and prose, often wrote of the humor in the works of contemporaneous authors such as Franz Kafka. In response to this humor, Borges created a comedic tradition all his own. Humor in Borges studies the humor embedded in the fiction of a serious and metaphysical literary figure.

René de Costa shows how Borges was concerned with making the embedded humor in his work more apparent without abandoning the essential story line. De Costa examines the ways in which Borges transformed established modes of writing—the chronicle, the book review, the obituary, the detective story—into genre parodies. He looks at Borges's canonical collections, identifying the humor in such simple things as a footnote, a false epigraph, or a postscript.

Humor in Borges couples elegant scholarship with a comedic edge and is both accessible and enjoyable to read. Scholars and students of twentieth-century Spanish and Latin American literature will delight in this fascinating look at laughter in the work of Jorge Luis Borges.

René de Costa is a professor of romance languages at the University of Chicago.

Humor in Borges shows the mind of an original literary critic and a rigorous scholar. The writing is clear and concise; the new translations crackle with bilingual wit. The author has an excellent command of the primary and secondary sources; the index of works studied is a valuable tool for aficionados, and [Humor in Borges] is, in itself, an index of scope and depth.

The beauty of this book is that it is written in an accessible manner suitable for both the literary academic and those readers who love Borges' work and wish to expand their understanding of it. Both delightful and informative, this book will be a pleasure to all those who have found themselves wandering, amazed, in the labyrinth of Borges' fiction.

– British Bulletin of Publications on Latin America, the Caribbean, Portugal, and Spain

10 hours 45 min ago
In honor of the #CityofDetroit turning 321 years old on July 24th, WSUPress will be showcasing one Detroit Book of… https://t.co/PA7nONh4C0
15 hours 48 min ago
OUR FALL & WINTER 2022 TITLES ARE NOW AVAILABLE FOR PRE-ORDER! Grab your copy of any of our fall & winter titles f… https://t.co/qDykAsF9sk
2 days 17 hours ago
Happy Pub Date to THE SPOOK WHO SAT BY THE DOOR, SECOND EDITION! This new edition of a literary classic now includ… https://t.co/XrCsLZvf4D