Home » Books » How It Happens 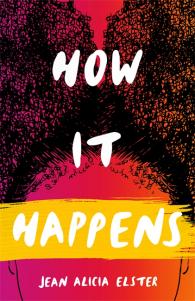 How It Happens follows the story of author Jean Alicia Elster’s maternal grandmother, Dorothy May Jackson. Born in Tennessee in 1890, Dorothy May was the middle daughter of Addie Jackson, a married African-American housekeeper at one of the white boardinghouses in town, and Tom Mitchell, a commanding white attorney from a prominent family. Through three successive generations of African-American women, Elster intertwines the fictionalized adaptations of the defining periods and challenges—race relations, miscegenation, sexual assault, and class divisions—in her family’s history.

A continuation of the plots begun in Elster’s two novels Who’s Jim Hines? and The Colored Car, How It Happens continues the story for an older audience and begins with Addie’s life before the turn of the century in the South as a married Black woman with three biracial daughters navigating the relationship between her husband and Tom Mitchell. Later the story shifts to Addie’s daughter Dorothy May’s experiences both as a child and later, as a teacher who, choosing between her career and marriage to a man she barely knows, moves to Detroit. The story moves along with Dorothy May’s daughter Jean, who, with the support of her mother and the memory of her grandmother, confronts and comes to terms with her role in society and the options available to her as a college-educated Black woman in the post–World War II industrial North. While there is struggle and hardship for each of these women, they each build off one other and continue to demand space in the world in which they live.

Written for young adult readers, How It Happens carries the heart through the obstacles that still face women of color today and persists in holding open the door of communication between generations.

A 2017 Kresge artist fellow and a former attorney, Jean Alicia Elster is a professional writer of fiction for children and young adults. She is the great-granddaughter of Addie Jackson, whose family story is the basis of How It Happens. Elster is the author of the Michigan Notable Books Who’s Jim Hines? (Wayne State University Press, 2008) and The Colored Car (Wayne State University Press, 2013).

A captivating and necessary story that navigates through a difficult part of American history in a way that people of all ages can understand and connect with. In sharing her family's story, Elster shares the story of so many of us.

– Kelly J. Baptist, author of Isaiah Dunn Is My Hero and The Electric Slide and Kai

A beautiful and meticulously researched novel, How It Happens takes us into the world of three memorable young Black women, Addie, May, and Jean, each living in a different generation, each seeking to achieve freedom. Looking at racism straight in the eye, Jean Alicia Elster has written a powerful and timely story of resilience and hope. A must-read novel for all young adult readers.

The history of slavery and oppression is white history. The story of survival is black history. Through the lens of one black family’s experience in America, Elster details racism’s vicious assault on the black family, and how African Americans have triumphed regardless. Thank you, Jean Alicia Elster, for reminding us exactly how victory happens.

How It Happens is an excellent conversation starter. It offers a slightly different viewpoint than I’ve seen presented before—without the rose-colored softening of a fateful relationship that started with an order that, in that time and place, could not be refused.

Written for young adult readers, How It Happens carries the heart through the obstacles that still face women of color today and persists in holding open the door of communication between generations.

– Nancy A. Bekofske, The Literate Quilter

A captivating narrative of struggle and determination, which does not shy away from portraying class divisions, racism, and sexual assault in American society, How It Happens is highly recommended especially for school and public library YA Fiction collections.

I’m glad I was given a review copy of How it Happens. It is such a unique novel because it tackles racism from multiple perspectives, each written beautifully. I recommend this book to young people who are mature enough to read about topics like racism, lynching, and sexual assault.

Jean Alicia Elster invites the reader into her own historical journey that is profound, educational, and inspirational. Jean has the ability to give the page turner the opportunity to get to know several characters and the many challenges they faced up close and personally.

In 1890, Addie Jackson is an African American laundress who works at a boarding house operated by white people in Clarksville, Tennessee. She is coerced into a sexual relationship by Tom Mitchell, a white boarder from a prominent Confederate family, despite the fact that she is married. She bears three biracial daughters for Tom amid anti-miscegenation laws, small-town gossip, and marital strife. In 1922, Addie's middle daughter, Dorothy May Jackson, is given an opportunity for college in Nashville. She faces a dilemma when she must choose between a teaching career at the Clarksville Colored School and living a new life in Detroit as the wife of entrepreneur Douglas Ford, a man whom she barely knows. Between 1949 and 1951, Addie's granddaughter, Jean Ford, faces class conflicts and two attempted sexual assaults while working at a recreation center. She faces a harsh reality when she receives a failing grade from a racist college professor. She ends up choosing between a teaching career and married life as family secrets are revealed. Elster has written an eloquent YA novel based on her own maternal family history. Readers will appreciate the intergenerational stories of Addie, Dorothy May, and Jean. They will enjoy and treasure their strength, determination, and resilience amid racism, abuse, conflicting gender roles, and family secrets. VERDICT This triumphant volume of Black women's stories will engage readers.

powerful, eye-opening, poignant, sometimes funny too. Jubilant despite everything.

...powerful, eye-opening, poignant, sometimes funny too. Jubilant despite everything.

– Fiona Robertson, author of If You're Happy

Featured on The Mitten: The Society of Children's Book Writers and Illustrators, Michigan Chapter Blog (February 11, 2022)

2 days 38 min ago
Now a National Jewish Book Award Finalist! @JewishBook https://t.co/qTKAeUEPVX
2 days 4 hours ago
RT @Steph_Steinberg: Tomorrow @ 7 p.m.! Join me and @DETWritingRoom at The Whitney for our first #2023AuthorSeries event ft. @waynestate… https://t.co/pssbi2NLNs
6 days 5 hours ago
SAVE THE DATE! Join author Desiree Cooper and illustrator Bec Sloane this Saturday for a behind the scenes look at… https://t.co/cKDBmbewOa