Home » Books » The House on Alexandrine 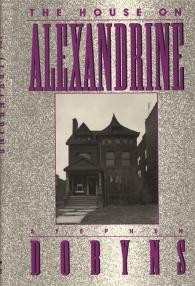 The House on Alexandrine

These episodes give us the characteristic Detroit of recent fiction by Joyce Carol Oates, Elmore Leonard, and Loren Estelman.

Set against the violently fragmented matrix of Detroit in 1973, Dobyns' novel is an unlikely fusion of love and violence. The plot centers around the lives of fifteen people—and three dogs—who live in a Cass Corridor rooming house. When an innocent Ontario farm boy comes to Detroit in search of his runaway sister, he provides a temporary focus for the other residents. They include a bartender/writer, an avant-garde composer and his wife, a former policeman, a female artist whose rent is being paid by two men, and a pair of elderly ex-convicts—one a panhandler, the other a locksmith.
Robbery, murder, a stabbing, a poisoning, and a fire serve to bring about a profound emotional transformation among the characters. Against this hostile urban landscape, Dobyns weaves his extrordinary human tapestry. By the novel's close, the housemates "unite" to form a rich though volatile world.

Stephen Dobyns is the author of eleven novels and six books of poetry. Born in New Jersey in 1941, he attended Shimer College, Wayne State University, and the University of Iowa. His most recent novels include Saratoga Bestiary and The Two Deaths of Senora puccini. Concurring Beasts, his first book of poems, was chosen the Lamont Poetry Selection for 1971. Black Dog, Red Dog was a selection of the National Poetry Series in 1984. Stephen Dobyns has taught courses on poetry and writing at many colleges and universities and is currently a professor of English at Syracuse University.