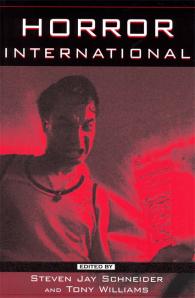 The scope of the volume is impressive. The scholarship is uniformly excellent. The editors have done a good job choosing the topics and contributors and editing the selections for style. The essays are of high quality, relatively easy to read.

— Journal of Film and Video

As global cinema becomes increasingly difficult to distinguish, characterizations of horror films from various geographical and cultural locations seem more fluid and transitional than ever before. However, this does not mean denying the existence of national features that affect and are reflected in horror films, whether from an artistic or a reception standpoint. Horror is one of the most studied genres in cinema, yet none of the many books on the subject focus on films or traditions outside the United States or the United Kingdom. While Italian, Japanese, Mexican, German, and Hong Kong horror films have received a modicum of critical recognition, the areas of Egyptian, Romanian, Belgian, Dutch, New Zealand, and Thai horror all still need—in fact, demand—some attention.

Horror International seeks to rectify this by giving the global perspectives and cross-cultural dynamics of world horror cinema its due. This groundbreaking collection of eighteen original essays examine a myriad of films, showing how each draws from Hollywood horror conventions and also local cinematic traditions, local folklore, and national historical and cultural concerns. The production, marketing, and reception of various national cinemas are also addressed, demonstrating how these films are understood by different audiences worldwide. This in turn sheds new light on the original cultural production of many works and their subsequent "translations" and meanings in different national contexts. The diverse and highly informative essays in Horror International will engross both scholars and fans of horror films and finally illuminate the distinct multicultural factors of this exciting cinematic genre.

Steven Jay Schneider is a PhD candidate in cinema studies at New York University. He is editor of Fear Without Frontiers: Horror Cinema across the Globe (FAB Press, 2003) and New Hollywood Violence (Manchester University Press, 2004).

Tony Williams is professor and area head of film studies in the English department of Southern Illinois University at Carbondale. He is author of The Cinema of George A. Romero: Knight of the Living Dead (Wallflower Press, 2003) and Body and Soul: The Cinematic Vision of Robert Aldrich (Scarecrow Press, 2004).

An important contribution to the field, Horror International fills a very real need for scholarly work that reaches beyond American horror and engages international production. The book is particularly strong in its scope-not only gialli, Hong Kong cinema, and Spanish horror, but Thai cinema, Egyptian films, [and] Dutch and Romanian horror are covered here. In addition to providing excellent analyses of individual films, national cinemas, and international trends, the book engages important theoretical debates and discusses the impact of new technology (such as Anchor Bay's excellent DVD series). This will be a great book for classroom use as well as for individual scholarship."

The advantages of this book over its competition are that it includes the greatest number of national cinemas, shows the greatest variety of critical approaches and is the most up to date. The scope of the volume is impressive. The scholarship is uniformly excellent. The editors have done a good job choosing the topics and contributors and editing the selections for style. The essays are of high quality, relatively easy to read. The book would be appropriate as a required text or as supplementary reading in undergraduate or graduate classes on horror cinema or on trends in global cinema. It may also appeal to educated fans of horror.

– Journal of Film and Video