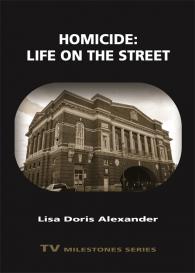 Homicide: Life on the Street

Renowned for its unique visual style, Homicide: Life on the Street fundamentally changed the police procedural genre. The show broke records, featured memorable characters, and launched careers--most notably that of David Simon, whose own nonfiction book, Homicide: A Year on the Killing Streets, inspired the series, and who went on to create both The Wire and Treme. Homicide was an anomaly in the 1990s for its honest and open portrayals and discussions of race, and in this TV Milestone, Lisa Doris Alexander uses Critical Race Theory as a lens to highlight how the show illustrated the impacts that racial politics can have on policing.

Homicide is one in a long line of police procedurals that date back to the early days of broadcast television, with series such as Dragnet (NBC 1951–59), Hawaii Five-O (CBS 1968–80), and Columbo (NBC 1971–78). But because Homicide takes place and was filmed in the majority-Black city of Baltimore, it makes sense that many of the main and supporting cast are Black. This differentiated it from the other shows of its genre and time. Chapter 1 discusses the Black-starring roles on Homicide in terms of being non-stereotypical and both written and performed as well-rounded, complex characters. Chapter 2 focuses on issues of race and racism and their impact on policing. Chapter 3 looks at other power dynamics, such as class, political clout, and social standing, and how those dynamics intersect with race and the criminal justice system’s perceived neutrality.

In many regards, Homicide was ahead of its time. Alexander argues that Homicide reflects the politics of the Black Lives Matter movement, which in turn highlights the fact that the issues brought up by the movement are long-standing and that the series affirms the critiques BLM activists make about the criminal justice system. This book shows that the series’ oftentimes unflinching commentary on the systemic flaws within the criminal justice system not only feels more at home in today’s television and political landscape than it did in the 1990s but is just as relevant. Fans of the works of David Simon, as well as students and scholars of television studies and Critical Race Theory, will enjoy this enlightening book.

Lisa Doris Alexander is a professor in the Department of African American Studies at Wayne State University. She is the author of Expanding the Black Film Canon: Race and Genre across Six Decades and When Baseball Isn’t White, Straight and Male: The Media and Difference in the National Pastime.

Altogether, Alexander provides a robust critical
discussion on how Homicide: Life on the Street displays
racial dynamics in the criminal justice system,
especially among police officers. She highlights several
positive aspects of how the show portrays racial
experiences during the 1990s and discusses them in
relation to current debates about racial inequality and
disparate treatment of Blacks. Alexander’s book makes
a compelling case for how TV shows can successfully
engage in debates to further the public’s understanding
of critical issues such as race and encourage the public
to engage with racial experiences portrayed on TV.

Nevertheless, her detailed discussion of particular episodes and characters would work well as a springboard for discussion in teaching and her account of her methodological use of CRT (pp. 9-13) is also useful.

13 hours 14 min ago
HAPPY NATIONAL BOOK LOVERS DAY! In celebration of today, comment your current favorite book or something that you… https://t.co/SqfUAeiLHy
16 hours 8 min ago
QUEERING ANTI-ZIONISM by Corinne E. Blackmer is a queer critique of anti-Zionism, exploring how the Boycott, Divest… https://t.co/jk8OUUN7ku
16 hours 11 min ago
@WSUHumClinic It was such a pleasure to have you here, Carly!