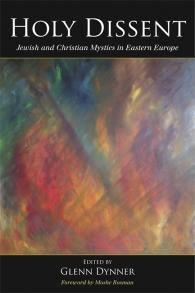 This very interesting collection of essays opens the door wide to considering Eastern European Jewry and Judaism in a broad historical context. Dynner and the participants have made a solid contribution to our understanding. I learned much from

Holy Dissent is divided into two sections: "Jewish Mystics in a Christian World" and "Christianizing Jews, Judaizing Christians." In these essays, readers learn that Jewish and Christian folk healers consulted each other and learned from common sources; that the founder of Hasidism, Rabbi Israel Ba‘al Shem Tov, likely drew inspiration from Christian ascetics; that Christian peasants sought and obtained audience with Hasidic masters; that Jewish mystics openly Christianized; and that Christian mystics openly Judaized. In contrast to prevailing models that present Jewish and Christian cultures as either rigidly autonomous or ambiguously hybrid, Holy Dissent charts specific types of religio-cultural exchange and broadens our conception of how cultures interact.

The scholarship in this volume is notably fresh and significant and makes an important contribution across disciplines. Jewish and Christian studies scholars as well as historians of Eastern Europe will benefit from the analysis of Holy Dissent.

Glenn Dynner is professor of Judaic studies at Sarah Lawrence College in Bronxville, New York, and Hans Kohn Member of the Institute for Advanced Study at Princeton University. He is the author of Men of Silk: The Hasidic Conquest of Polish Jewish Society.

This fascinating collection of articles demonstrates that the 'common pool' of ideas expressed by scholars from different countries with varying cultural traditions contributes a new slant to the study of the 'common pool' of Jewish-Slavic hybridic coexistence in the past. This volume is an indispensable tool for the steadily growing research on the Jewish-Slavic encounter in eastern Europe.

Rich collection of essays....The picture that emerges is one of cross-cultural exchanges that flow in multiple directions and take place in a wide variety of forms and in a multitude of secular and spiritual arenas. The level of the essays is high, and some will become standouts in their fields.

I cannot think of a recent collection that has so much novel and significant material in it. Some of these essays are first publications and very significant ones. Many of the contributors use newly available sources and ask fresh questions."

– Shaul Stampfer, Rabbi Edward Sandrow Professor of Soviet and East European Jewry and chairman of the Department of Jewish History at the Hebrew University of Jerusalem

This very interesting collection of essays opens the door wide to considering Eastern European Jewry and Judaism in a broad historical context. Dynner and the participants have made a solid contribution to our understanding. I learned much from reading it."

Tapping a broad array of sources beyond traditional religious texts, Holy Dissent
provides a dozen interesting snapshots of religious mysticism in modern Eastern
Europe.... mapping concrete cases of hybridity like these provides the foundation for a broader understanding of how cultures interact.

Holy Dissent is a collection of technical but largely accessible essays by various scholars of Eastern European Judaism and Christianity who illustrate in great detail the complex, colorful, dark, and messy marketplace of Eastern Europe from the seventeenth through the nineteenth centuries... This kind of study is more complex and in my mind more fruitful than comparative religion.