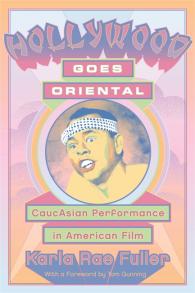 Karla Rae Fuller
With a Foreword by Tom Gunning

Fuller's study of images of Asian Americans in film takes an insightful approach by examining the practice of performances in 'yellowface': white (or in rare cases, black) actors portraying Asian characters.”

In the "classical" Hollywood studio era of the 1930s to the 1960s, many iconic Asian roles were filled by non-Asian actors and some—like Fu Manchu or Charlie Chan—are still familiar today. In Hollywood Goes Oriental: CaucAsian Performance in American Film, Karla Rae Fuller tracks specific cosmetic devices, physical gestures, dramatic cues, and narrative conventions to argue that representations of Oriental identity by Caucasian actors in the studio era offer an archetypal standard. Through this standard, Fuller shed light on the artificial foundations of Hollywood’s depictions of race and larger issues of ethnicity and performance.

Fuller begins by investigating a range of Hollywood productions, including animated images, B films, and blockbusters, to identify the elaborate make-up practices and distinct performance styles that characterize Hollywood’s Oriental. In chapter 2, Fuller focuses on the most well known Oriental archetype, the detective, who incorporates both heroic qualities and darker elements into a complex persona. Moving into the World War II era, Fuller examines the Oriental character as political enemy and cultural outsider in chapter 3, drawing a distinction between the "good" Chinese and the "sinister" Japanese character. In chapter 4, she traces a shift back to a seemingly more benign, erotic, and often comedic depiction of Oriental characters after the war.

While Hollywood Goes Oriental primarily focuses on representations of Oriental characters by Caucasian actors, Fuller includes examples of performances by non-Caucasian actors as well. She also delves into the origination, connotations, and repercussions of the loaded term "yellowface," which has been appropriated for many causes. Students, scholars of film, and anyone interested in Asian and cultural studies will appreciate this insightful study.

Karla Rae Fuller is associate professor in the film and video department at Columbia College, Chicago, and the editor of the forthcoming Interviews with Ang Lee.

Fuller's study of images of Asian Americans in film takes an insightful approach by examining the practice of performances in 'yellowface': white (or in rare cases, black) actors portraying Asian characters. Hollywood Goes Oriental makes a substantial contribution to the literature in Asian American studies."

– Frank H. Wu, chancellor and dean at the University of California Hastings College of the Law

Too often Hollywood cinema is reduced to a homogenized product. Fuller, while primarily tracing consistencies within the Hollywood product, also traces the heterogeneous nature of Hollywood's output. Thus, she not only chooses films in which Oriental characters are played by non-Orientals but has discovered films in which the issues of disguise, masquerade, and even stereotyping are central."

– Tom Gunning, professor of cinema and media studies at the University of Chicago

Fuller's discussion of cross-ethnic performance in Hollywood films is long overdue. She adds valuable insights to film studies, ethnic studies, and gender studies, while her use of performance theory in the analysis-in which ethnicity is viewed as a social construct that is expressed through the body-points to the possibility of new perspectives."

5 hours 13 min ago
Happy Pub Date! HOUSE AND HOME is a collection of poems that intensely explore the beauty & wisdom to be found in w… https://t.co/MYnkKJxcrx
2 days 7 hours ago
Join WSU President M. Roy Wilson for a book talk next Wednesday! Copies of his memoir will be available for sale a… https://t.co/6q5w5dtFtu
4 days 7 hours ago
TONIGHT! Join @stephanie_heit at @ShopBooksweet for local author's night! https://t.co/pTny5OErDe