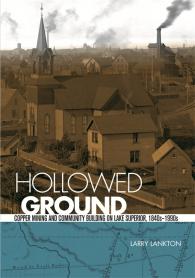 In Hollowed Ground, author Larry Lankton tells the story of two copper industries on Lake Superior-native copper mining, which produced about 11 billion pounds of the metal from the 1840s until the late 1960s, and copper sulfide mining, which began in the 1950s and produced another 4.4 billion pounds of copper through the 1990s. In addition to documenting companies and their mines, mills, and smelters, Hollowed Ground is also a community study. It examines the region's population and ethnic mix, which was a direct result of the mining industry, and the companies' paternalistic involvement in community building.

While this book covers the history of the entire Lake Superior mining industry, it particularly focuses on the three biggest, most important, and longest-lived companies: Calumet & Hecla, Copper Range, and Quincy. Lankton shows the extent of the companies' influence over their mining locations, as they constructed the houses and neighborhoods of their company towns, set the course of local schools, saw that churches got land to build on, encouraged the growth of commercial villages on the margin of a mine, and even provided pasturage for workers' milk cows and space for vegetable gardens. Lankton also traces the interconnected fortunes of the mining communities and their companies through times of bustling economic growth and periods of decline and closure.

In Hollowed Ground, Larry Lankton does an excellent job outlining the present consequences of earlier choices in the Copper Country. I particularly admire his skill at describing the complex technology of mining and architecture in an accessible way."

Once again, Larry Lankton provides us with an informative and absorbing account of copper mining on Michigan's Keweenaw Peninsula. By focusing on the region's three largest copper producers, Hollowed Ground documents the dynamic evolution of the Keweenaw's social and industrial landscapes, thereby giving us a context for understanding those landscapes today."

– Arnold R. Alanen, professor emeritus in the Department of Landscape Architecture at the University of Wisconsin-Madison

Larry Lankton has written the best study of an industrial region since Harry Caudill's 1960s classic, Night Comes to the Cumberlands. No one has a better understanding of Michigan's legendary Copper Country, its scarred but still beautiful landscapes, and its hard-working people."

Lankton succeeds in illustrating how work and daily life and company and community remained interconnected throughout Michigan's Copper Country. . . Hollowed Ground is a well-written and engaging narrative by the foremost authority on Lake Superior copper mining and is highly recommended for students and scholars alike."