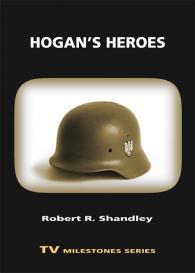 A nuanced examination of the narrative protocols involved in making a seemingly ridiculous—and potentially shocking—premise palatable for the televiewing masses, this book is an indispensable contribution to the field.

Hogan’s Heroes originally aired between 1965 and 1971 on CBS, corresponding to the most uncertain years of America’s involvement in the Vietnam War. In an era when attitudes about the military, patriotism, and authority were undergoing a sea change, Hogan’s Heroes did not offer direct commentary on the conflict, but instead explored incompetent military leaders, draft dodging, and perpetual war in an absurd storyline about Allied saboteurs inside a World War II German prisoner of war camp. In Hogan’s Heroes, author Robert Shandley argues that the series reveals much about the parameters of comedy on militarism and war before the popularity of comedic social realism that would define later programs, like the more critically acclaimed M*A*S*H.

In three chapters, Shandley investigates the significance of Hogan’s Heroes to social, cultural, and television history. First, Shandley places Hogan’s Heroes within its generic and television history contexts, providing background on the genre of "uniform sitcoms" that were popular in the mid-60s. In the second chapter, he places the series within the historical, filmic, and televisual discourses surrounding World War II, including the fact that several of its actors were refugees from the racial politics of Nazi Germany. Finally, Shandley demonstrates how the series uses its generic framework to engage in debates about the conflict in Vietnam and American militarism and shows that Hogan’s Heroes laid the groundwork upon which M*A*S*H would build. Since the storyline and characters in Hogan’s Heroes do not significantly progress throughout the run of the show, Shandley primarily analyzes the show at the episode level to make the most of specific performances and content.

While it was moderately successful in its network run between 1965 and 1971, Hogan’s Heroes has enjoyed constant play in syndicated re-release since its cancellation. Fans of this well-loved show and scholars of television history will appreciate this insightful study of Hogan’s Heroes.

Robert R. Shandley is professor of film studies and German at Texas A&M University. He is the author of Runaway Romances: Hollywood’s Postwar Tour of Europe and Rubble Films: German Cinema in the Shadow of the Third Reich.

Shandley makes the case that this critically disparaged forerunner of M*A*S*H deserves consideration as an allegorical statement about contemporaneous social and political issues, yet he reminds us that Hogan's Heroes also did 'active harm' to the historical project, to the cultural unpacking of Nazi atrocities decades earlier. A nuanced examination of the narrative protocols involved in making a seemingly ridiculous-and potentially shocking-premise palatable for the televiewing masses, this book is an indispensable contribution to the field."

Shandley shows how Hogan's Heroes was both shaped by and exerted influence upon its cultural context, and how it provided social and political commentary while operating within generic constraints. Shandley's study is clearly organized and cogently argued."