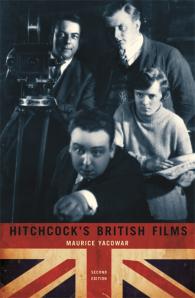 Hitchcock's British Films remains the most illuminating and comprehensive discussion of Hitchcock's work before he moved to California. It is lucid, well balanced in its understandings of the films, informative (especially regarding Hitchcock's use of the novels and plays that were sources of most of his screenplays), and comprehensive.

Originally published in 1977 and long out of print, Maurice Yacowar’s Hitchcock’s British Films was the first volume devoted solely to the twenty-three films directed by Alfred Hitchcock in his native England before he came to the United States. As such, it was the first book to challenge the assumption that Hitchcock’s "mature" period in Hollywood, from the late 1940s to the early 1960s, represented the director’s best work. In this traditional auteurist examination of Hitchcock’s early work, author Maurice Yacowar considers Hitchcock’s British films in chronological order, reads the composition of individual shots and scenes in each, and pays special attention to the films’ verbal effects.

Yacowar’s readings remain compelling more than thirty years after they were written, and some—on Downhill, Champagne, and Waltzes from Vienna—are among the few extended interpretations of these films that exist. Alongside important works such as Murder!, the first The Man Who Knew Too Much, Secret Agent, The Lady Vanishes, and Blackmail, readers will appreciate Yacowar’s equal attention to lesser-known films like The Pleasure Garden, The Ring, and The Manxman. Yacowar dissects Hitchcock’s precise staging and technical production to draw out ethical themes and metaphysical meanings of each film, while keeping a close eye on the source material, such as novels and plays, that Hitchcock used as the inspiration for many of his screenplays. Yacowar concludes with an overview of Hitchcock as auteur and an appendix identifying the director’s appearances in these films.

A foreword by Barry Keith Grant and a preface to the second edition from Yacowar complete this comprehensive volume. Anyone interested in Hitchcock, classic British cinema, or the history of film will appreciate Yacowar’s accessible and often witty exploration of the director’s early work.

Maurice Yacowar is professor emeritus of English and film studies at the University of Calgary. He published studies of the films of Tennessee Williams, Woody Allen, Mel Brooks, and Paul Morrissey, as well as a novel, The Bold Testament. His most recent books are The Sopranos Season Seven and the biography The Great Bratby.

For anyone interested in Alfred Hitchcock this is a must for the collection and will invite a new look at those rarer and the lesser known of his films...

Hitchcock's British Films remains the most illuminating and comprehensive discussion of Hitchcock's work before he moved to California. It is lucid, well balanced in its understandings of the films, informative (especially regarding Hitchcock's use of the novels and plays that were sources of most of his screenplays), and comprehensive."

How welcome to see Hitchcock's British Films back in print. For a long time it was the only full-length treatment of Hitchcock's formative period, and Yacowar's analyses of specific films remain so well judged, articulate, and penetrating that his book has scarcely dated since the day it was published over thirty years ago."

– Thomas Leitch, professor of English at the University of Delaware, co-editor of the forthcoming A Companion to Hitchcock Studies, and author of Perry Mason (Wayne State University Press, 2005)