Home » Books » History of the Finns in Michigan 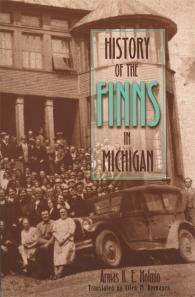 History of the Finns in Michigan

Michigan's Upper Peninsula was a major destination for Finns during the peak years of migration in the nineteenth century and the early decades of the twentieth century. Several Upper Peninsula communities had large Finnish populations and Finnish churches, lodges, cooperative stores, and temperance societies. Ishpeming and Hancock, especially, were important nationally as Finnish cultural centers.
Originally published in Finnish in 1967 by Armas K. E. Holmio, History of the Finns in Michigan, translated into English by Ellen M. Ryynanen, brings the story of the contribution of Finnish immigrants into the mainstream of Michigan history. Holmio combines firsthand experience and personal contact with the first generation of Finnish immigrants with research in Finnish-language sources to create an important and compelling story of an immigrant group and its role in the development of Michigan.

Armas K. E. Holmio (1897-1977), a Finnish immigrant, was pastor of the Lutheran Church of American and a professor of history at Suomi College and Theological Seminary.