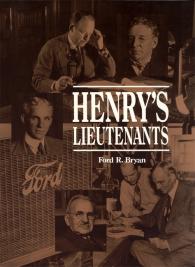 Although Henry Ford gloried in the limelight of highly publicized achievement, he privately admitted, "I don't do so much, I just go around lighting fires under other people."

Henry's Lieutenants features biographies of thirty-five "other people" who served Henry Ford in a variety of capacities, and nearly all of whom contributed to his fame. These biographical sketches and career highlights reflect the people of high caliber employed by Henry Ford to accomplish his goals: Harry Bennett, Albert Kahn, Ernest Kanzler, William S. Knudsen, and Charles E. Sorenson, among others. Most were employed by the Ford Motor Company, although a few of them were Ford's personal employees satisfying concurrent needs of a more private nature, including his farming, educational, and sociological ventures.

Ford Bryan obtained a considerable amount of the material in this book from the oral reminiscences of the subjects themselves.

Ford R. Bryan is a historical researcher for the Henry Ford Museum & Greenfield Village Archives and Library. He is the author of Beyond the Model T: The Other Ventures of Henry Ford and The Fords of Dearborn: An Illustrated History.

Endlessly fascinating. A must for all Henry Ford I buffs.

2 days 22 min ago
Now a National Jewish Book Award Finalist! @JewishBook https://t.co/qTKAeUEPVX
2 days 3 hours ago
RT @Steph_Steinberg: Tomorrow @ 7 p.m.! Join me and @DETWritingRoom at The Whitney for our first #2023AuthorSeries event ft. @waynestate… https://t.co/pssbi2NLNs
6 days 5 hours ago
SAVE THE DATE! Join author Desiree Cooper and illustrator Bec Sloane this Saturday for a behind the scenes look at… https://t.co/cKDBmbewOa