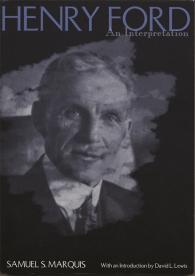 Samuel S. Marquis
With an Introduction by David L. Lewis

Students of Henry Ford should be delighted by this republication of Samuel S. Marquis's shrewd evaluation of the legendary industrialist.

Regarded by many automotive historians as the finest and most dispassionate character study of Henry Ford ever written, Henry Ford: An Interpretation has long been out of print and priced out of the reach of many collectors. Published at the height of Ford's success in 1923, the volume was written by the Reverend Samuel S. Marquis, an Episcopalian minister who was also the head of the sociology department at Ford Motor Company. Instead of a history of Ford Motor Company or a simple retelling of Ford's life story, Marquis claims that his collection of essays is intended to analyze the "psychological puzzle such as the unusual mind and personality of Henry Ford presents."

In insightful chapters that can be read in any order, Marquis examines Ford's mastery of self-promotion, his invincible reputation, his religious views, and his "elusive" personality. He also considers Ford through the lens of his corporation by commenting on its industrial operations, its charitable causes, and its "executive scrap heap." According to many accounts, Henry Ford was greatly pained by the criticism in some of Marquis's essays, which led him to suppress the wide distribution of the volume. Indeed, so many copies of Henry Ford: An Interpretation were borrowed from the Detroit Public Library and never returned that the library was forced to remove the volume from its shelves. Not surprisingly, the original edition of this book is very expensive and hard to find as a result of these sorts of actions.

Ford history enthusiasts as well as readers who are interested in historical biography will be grateful for the reprint of this significant volume.

Reverend Samuel S. Marquis was an Episcopalian minister who was also the head of Ford Motor Company's Sociological Department from 1919-1921.

Students of Henry Ford should be delighted by this republication of Samuel S. Marquis's shrewd evaluation of the legendary industrialist. A close friend and associate of Ford for many years, Marquis developed many compelling insights into the automobile maker's character and personality. One comes away from this book with a much greater sense of what made Ford tick."

– Steven Watts, professor of history at the University of Missouri-Columbia and author of The People's Tycoon: Henry Ford and the American Century

Marquis was the first Ford intimate to criticize the industrialist in print. Aware that he was treading on thin ice, Marquis recalled that Ford had told him that 'the best friend one has is the man who tells him the truth.' Hopefully, the clergyman remarked, '[he] will receive the critical portion of these pages in the same spirit.' Ford emphatically did not . . . Marquis's book would have been widely read had not the Ford organization been fairly successful in buying up copies and persuading book dealers not to sell it."

– David Lewis, from the introduction

An absolute must on any automobile lover's shelf, this 206-page soft cover book has a timely foreword by David L. Lewis."